I wouldn’t normally consider writing about human rights issues here on LoyaltyLobby.com, but there are quite a few issues with the “glitz & glamour” in the GCC countries and the harsh reality of the Sharia law practiced there.

Everybody that travels to this region, and people increasingly do due to Emirates, Qatar and Etihad’s expansion, should familiarize themselves with the arcane Sharia law that is often still in place. 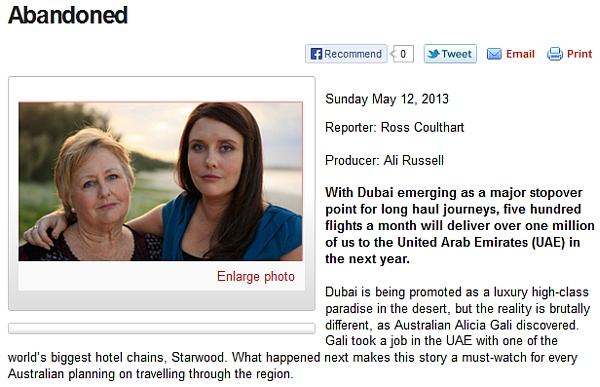 Gali was using her laptop in the hotel’s staff bar when her drink was spiked. She awoke to a nightmare beyond belief: she had been savagely raped by three of her colleagues. Alone and frightened, she took herself to hospital. What Alicia didn’t know is that under the UAE’s strict sharia laws, if the perpetrator does not confess, a rape cannot be convicted without four adult Muslim male witnesses. She was charged with having illicit sex outside marriage, and thrown in a filthy jail cell for eight months.

There was a feature on Australian TV about a female Starwood employee that got raped by three of her colleagues while working in UAE. She was charged and convicted for having illicit sex outside of marriage and thrown for prison for eight months.

You can watch the TV piece over here.

I don’t think that it comes as a surprise that the airline has trouble hiring westerners to work as their cabin crew. I have seen mainly Eastern Europeans, Filipinos, Thais etc. that can put up with the draconian “rules” of being a Qatar Airways employee.

The airline requires female employees to get explicit permission from the company to get married. You can read more about this over here.

One of the more bizarre stories originates out of Bahrain, with the GCC considering medical screening to detect if expats are gay or not.

Unless these officials have their head in the sand, medical screening has no way of determining an individual’s sexual orientation.

These tests would be performed on expat workers entering or returning to the GCC and if they “detected” an individual was gay, they would then be barred entry and deported.

There has been many news stories as of late regarding the situation with the foreign workers building the Doha World Cup facilities. I recently watch a documentary about the construction and other workers coming to UAE that are kept in close to slave type accommodations.

Employers in this region are also known to take away the employees passport for “safe” keeping purposes. This occurs not only with the lower-level jobs there, but even in office environments. This is absolutely appalling.

What I am trying to get across here is that not everything is what it looks like on the surface. Personally, I much prefer both Tel Aviv and Beirut over the glitzier Dubai, Abu Dhabi, Doha etc.

If you are traveling to the region, you should keep in mind the local laws, that can be quite contradictory to western ones.