There was quite a development today on the merger of AMR, the parent of America Airlines that is still in bankruptcy, and US Airways. The Department of Justice has reached tentative agreement that would allow the airlines merge. 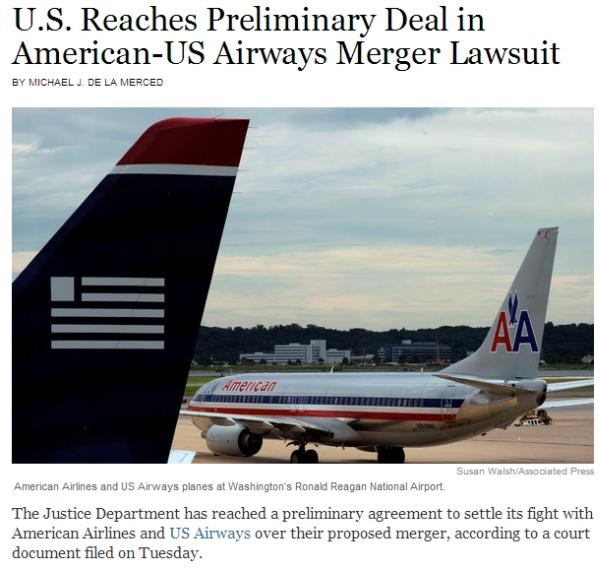 The airlines would sell some takeoff and landing slots at DCA and LGA airports. They are also required to divest assets at five airports. You can read more about this on NY Times article here.

The expected date for merger completion is in December 2013.

Here’s information about the settlement with the DOJ and State Attorney Generals:

To ensure much of the service currently operated by the carriers to small- and medium-sized markets from DCA is maintained, the new American has agreed with the DOT to use all of its DCA commuter slot pairs for service to these communities. The new American intends to announce the service changes that will result from the divestitures in advance of the sale of the DCA and LGA slots, so that the airlines acquiring those slots have the opportunity to maintain service to those impacted communities.

In the settlement agreement with the state Attorneys General, the new American has agreed to maintain its hubs in Charlotte, New York (Kennedy), Los Angeles, Miami, Chicago (O’Hare), Philadelphia, and Phoenix consistent with historical operations for a period of three years.  In addition, with limited exceptions, for a period of five years, the new American will continue to provide daily scheduled service from one or more of its hubs to each plaintiff state airport that has scheduled daily service from either American or US Airways. A previous settlement agreement with the state of Texas will be amended to make it consistent with today’s settlement.

It is now all but certain that the merger between these two airlines will happen.

US Airways will exit the Star Alliance soon after the merger is completed, but it will take a while for the American and US Airways to merge their systems.

If the two previous airline mergers with (United/Continental and Delta/Northwest) are any indication, the US Airways and American will launch the ability to move miles between frequent flier accounts and will match each others status shortly after the merger.

Airfare of the Day [First Class] AMERICAN AIRLINES Chicago to San Francisco (or v.v.) from $178 OW