The cabin personnel of Finnair are scheduled to go to on strike this weekend, that would halt most of Finnair’s flights that the airline is not able to crew using management personnel. The latest news is that the strike may not happen, however.

I was supposed to meet a friend in Bangkok that was scheduled to fly on Finnair Flight A095 on Saturday. The flight is not scheduled to be operated if the strike occurs, and the earlier flight to Bangkok that would operate was totally zeroed out in all cabins.

Strikes are relatively uncommon in Finland (compared to France), but sometimes even a threat of a strike may cause scheduling problems for the airline and the best advice is to try to get the airline to re-book you in advance. As a precaution, Finnair canceled a bunch of flights already for Friday even if the strike does not occur.

So, I told my friend to call Finnair and have them to re-book her on a Thai Airways flight via Stockholm or Copenhagen. I found this combination using ExpertFlyer. She had tried to call Finnair’s number in Finland and had been on queue for more than an hour before the call was dropped.

This is not unusual. The phone lines for the airlines become so congested in case of irregular operations that there is no way to get through, but I have a solution for this.

I dialed the Finnair’s toll free number in the States using Skype and got through to an agent without any delays. I gave the her the SK/TG flight number combo that she should be re-booked on and the agent did comply with my request after checking something for a few minutes. 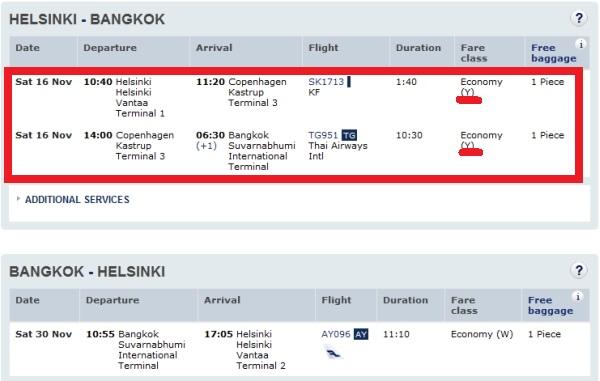 The updated e-ticket receipt with the new flight numbers came through shortly thereafter.

You should be as proactive as possible in case of possible short term strikes in Europe. In Finland, these usually get resolved prior the strike takeing place, but it is better to be safe than sorry, if getting to your destination is your first priority.

It is often easier to get hold of the airline, in case of severe interruptions, not just strikes, by calling their hotline in some other country.

Airfare of the Day [Business Class] FINNAIR Los Angeles to Beijing from $2,968