LoyaltyLobby reader sent me a link to a piece on Gadling (access here) about a TripAdvisor review that someone had left about a tour in Italy. 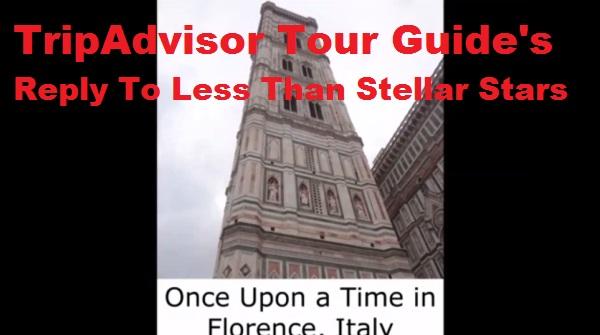 The tour guide had called the reviewer after reading the remarks and allowed him to record the conversation that has now made its way to YouTube.

A tourist gave a bad review on TripAdvisor for a very boring tour (he had 8 other tours with 4-5 stars in his profile – but this one was just bad). After the tour guide read it, he flipped out and called the tourist & decided to go into a tirade, despite being told he was being recorded. When I heard the story (from the tourist), I was shocked & offered to make this video of his story (I am better at MovieMaker). The tour guide’s name isn’t mentioned bc nobody wanted to “ruin his business” – just to inform other tourists that the tour is too detailed & not as advertised. But anyway, enjoy. We’ll update if TripAdvisor ever does anything since this behavior is clearly against their policies.

Oh well. This is quite unbelievable.

Many business spend too much time trying to perfect/manage their Yelp or TripAdvisor reviews & scores/stars rather trying to fix potential issues that the guest have.

All the business that are reviewed on these sites sometimes get less than stellar reviews that the owners don’t necessarily agree to. But the good this is that they all average out in the long terms.

If I have a look at the TripAdvisor, I mostly read the less than perfect star reviews, because I found them to be most authentic and warn potential issues that I may have with the property.

If you can find the actual review on TripAdvisor to which this was reply to, do send me an email and/or leave a comment below.