There was a development on the American Airlines and US Airways merger on November 27, 2013, when the bankruptcy judge approved the settlement that the airline had reached with the DOJ that was opposed to the merger. 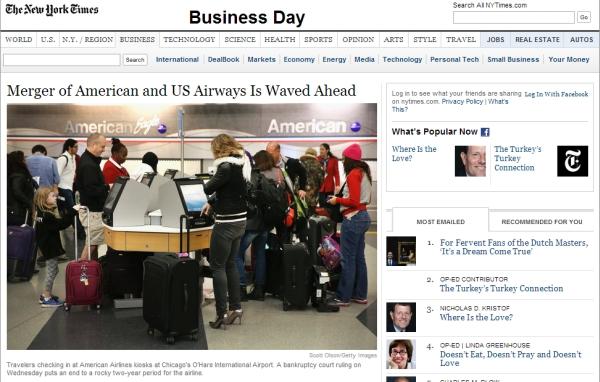 Now, the airlines are expected to merge on December 9 and the new stock of American Airlines Group (AAL) will start trading on Nasdaq on the same day. You can read more about these recent developments on NY Times (here) and from Bloomberg (here)

There is no immediate effect of this merger to frequent fliers of both airlines.

There is going to be an announcement on January 7, 2014, about “single airline for customers” initiative. It is likely that the frequent fliers of American and US Airways will get reciprocal benefits on each others flights from that day. The merging of the frequent flier programs will take a lot longer.

Let’s hope that the merger of these two airlines will go smoother than the one with United and Continental. It is interesting to see, how and when the frequent flier plans are merged. I have lifetime Platinum status with AA, so I have personal interest on this as well.