Avianca Brazil that is controlled by the investor group behind the other Avianca is becoming a Star Alliance member in 2014 after TAM has left the alliance. Star Alliance made this announcement on Friday.

The airlines legal name is OceanAir and has licensed the Avianca name for its use. The airline currently flies to around 20 destinations in Brazil. 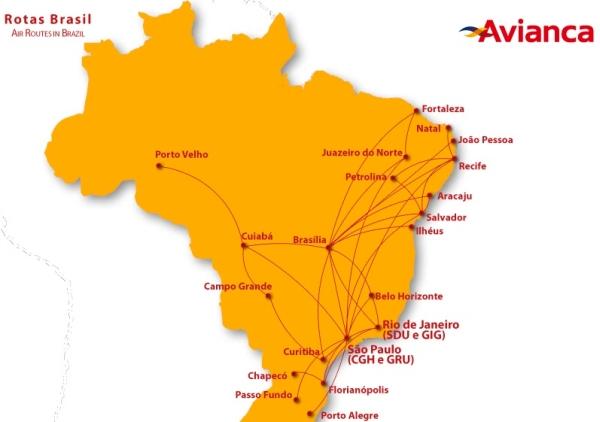 Brazil would have been a huge black hole for the Star Alliance after the TAM is gone, so this is good new for all Star Alliance fliers.

GOL has aligned itself with Delta and Azul (same founder as JetBlue) continues to operate independently.

Here’s the announcement from Star Alliance:

VIENNA, Austria – December 13th, 2013 – The Chief Executive Board of Star Alliance today agreed to extend Avianca’s membership of the Alliance to include its partner Avianca Brazil. The unanimous decision marks the first step in Star Alliance’s strategy to secure its position in the Brazilian market following current member airline TAM’s decision to leave the Alliance as a consequence of its merger with LAN.

“I am pleased that we have been able to secure Avianca Brazil as an addition to our network in Latin America’s largest country, biggest economy and most important aviation market”, said Mark Schwab, CEO Star Alliance. “Avianca Brazil is an expanding carrier and by working together we can build a network which will provide the essential connectivity we are looking to offer, while at the same time allowing Avianca Brazil to increase its international footprint.”

“Today marks an important day in the history of our company. Being part of the Star Alliance family will be beneficial to our own development and we look forward to welcoming Star Alliance customers in the not too distant future”, said German Efromovich, Chairman of the Avianca Network.

As a first step in the integration process, experts from Avianca Brazil, the Star Alliance member carriers serving Brazil and Star Alliance management will jointly work on enhancing Avianca Brazil’s network. The aim is to facilitate seamless connections via the major hubs in São Paulo – Guarulhos and Rio de Janeiro – Galeão/Antônio Carlos Jobim.

The integration expert teams at Star Alliance, Avianca and Avianca Brazil will now commence the necessary work in order to include the Brazilian carrier in the Alliance during 2014.

I have flown OceanAir couple of times in the past. The service was fine and inline what the other Brazilian airlines were offering at the time.

LifeMiles Singles Day Promotion With Up To 200% Bonus For Buying Miles Until November 15, 2020