The Problems Of Separate Airline Tickets

Two of LoyaltyLobby readers have sent me emails about situations they are having with airline tickets that they purchased separately due to cheaper pricing. 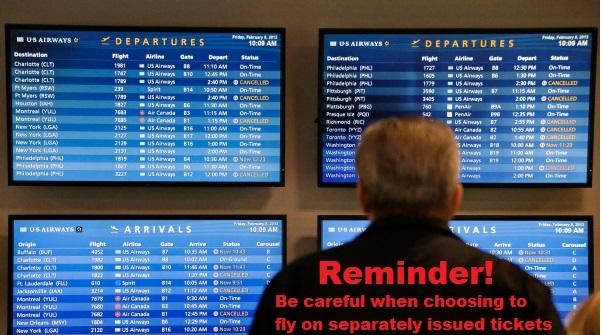 Often cheaper fares don’t allow end-on-end ticketing meaning that you cannot combine the discount fare from AAA-BBB with another fare from BBB to CCC without bumping the price up considerably.

You can obviously issue two separate tickets for AAA-BBB and for BBB-CCC segments, but there are drawbacks for this.

The airline that has issued the AAA-BBB and airline that issued the BBB-CCC are only required to transport you on the specific flights issued and delay in AAA-BBB won’t allow you to be reaccommodated on other BBB-CCC flights.

Couple of months ago I booked a flight from ATH to LCA on Cyprus Airways online. It would be one of the connecting flight for my journey from JTR-VIE. Original itinerary was as follows:-

It looked perfect and saved me a small fortune on the other hand able to try CY. I booked all flights separately as its significantly cheaper than book it as a whole through agents.

However, few days ago Cyprus Airways emailed me about the change of flight CY313, from dep on 14:05 significantly earlier by almost four hours to 10:45. It ruined my original itinerary totally.

I tried to have a look at the later flights of CY, and found the next flight by CY would be CY305 Dep 15:40 Arr 17:15, which couldn’t be an alternative for me neither.

As I m living in Hong Kong and therefore its much more convenient to email them to raise my concerns. However, CY gave me a negative response (email as per attached). They claimed that any flight time changed less than 5 hours would be considered as insignificant! I tried to search all over the terms and condition and found the follow paragraphs are relevant:

This is problematic case. Cyprus Airways is not responsible for the Aegean or Austrian flights, but four hour flight time change is significant enough to get a refund for the ATH-LCA segment.

Thanks for all the good work.  I have a question that I was wondering if you might have an answer to.  I’m a victim of the current snow storm! I had a flight booked with TAP LHR to EWR return and on a separate reservation EWR to BTV with United.  UAL cancelled my BTV to EWR so I would miss the EWR to LHR. I called TAP would not switch me to a UAL flight out of ORD and said I would have to rebook a day later on TAP.  Given there was no other choice I agreed and they said it would cost £200.  I have now received confirmation of payment and they have collected £339! So my question is, should they be charging for the change and how do I best argue that they said £299 and have now charged £339?

I’m 1K with UAL so gold with Star Alliance by the way.

This is really unfortunate case. TAP is not required to rebook OP due to UA flight cancellation as they are on separate tickets.

Theoretically (this is my pure opinion), United could have taken over the TAP ticket and rebook the passenger on UA’s metal to final destination, as there is no endorsement requirement within an alliance.

My advise for booking separate ticket

Earlier this week, I took SAS flight from Bangkok to Copenhagen, although my final destination was Helsinki. Apparently, SAS is battling with Norwegian and had extremely low priced tickets to both Copenhagen and Stockholm from Bangkok.

I booked one-way from Copenhagen to Helsinki on Norwegian on a flight that was 7 hours later than my flight to was scheduled to arrive CPH to allow possible reroutings if there is a problem with the SAS flight.

If everything was on time, I made an arrangement to have an access to the SAS lounge, where I could work the transfer time.

2. Be prepared to shell out extra cash in case of delays/cancellations

3. Pay bit more and have everything on one ticket

Whenever I am traveling on separate tickets, I always try to leave plenty of time between connections in case of delays and cancellations. Even then, you have to be prepared to throw away tickets and shell out cash for last minute substitute tickets.