Advice: Try Not To Transit In Countries That Require You To Have Visa To Enter Them

There have been a couple of examples this fall that have reminded me that I should advise readers to think twice (or more), if they decide to transit via countries that requires them to have a visa to enter the country itself. 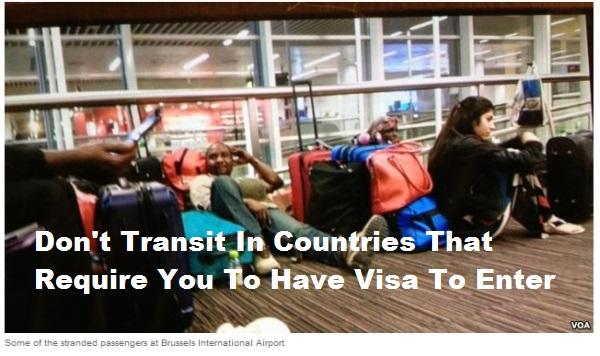 The problem lies if you happen to misconnect in any of the Schengen countries (list here) to a third country and you would need a Schengen visa to enter the country.

1. The airline cannot rebook you through any of the other Schengen countries, because you would need to first enter the Schengen area to make it to the connecting flights.

2. In case of longer delays, you cannot (usually) enter the country to get to the airline provided accommodations without having the visa.

This story made quite some noise in the social media back in October and I received few emails about it.

Passengers on these flights should have requested to be accommodated by EC 261/2004 on alternate carriers to their final destinations. There are numerous flights on non-European carriers from CDG to India and Middle East that Air France could have rerouted the passengers.

You can read more about this incident on VOA’s website here.

Some of the destinations in Africa are only served few times a week and some passengers were told that they would need to wait two days at the airport’s international transit area for their flights. Again, many of the passengers didn’t have Schengen visas that would have been the requirement to exit the airport.

The connecting flight options from Brussels to African destinations are nowhere near as good compared to from CDG to BOM.

1. Do not connect in countries that would require you a visa to enter the country itself, unless you have a visa or would be eligible for Visa On Arrival.

2. Know your rights. Airlines in Europe are required to provide care in case of delays and re-book you on alternate flights to your final destination.

3. When dealing with airline agents, it is easier to get them to book you to final destination if you can provide alternate flights that you believe you can be re-booked to.

I tend to use ExpertFlyer for flight availability to check, but you can use websites such as matrix.itasoftware.com or even Expedia.com.

Flight delays and cancellations are inevitable every once in a while. It is easier to deal with the issues if you know what your rights are and what airlines are able to do.

Whenever a flight is delayed that would lead to a mis-connect at a transit point, I try to work an alternate set of flights to get me to my destination. There are often rolling delays and flights can get canceled at some point, when the crew times out.

You should, however, bear in mind the drawbacks of transiting in a country that would require you to have a visa to enter. You can use the TIMATIC to check the entry requirements. This is the tool that the airline agents use and it is available for free on Star Alliance’s website (access here).

Reminder: Buy Up To 50,000 Marriott Rewards Points Per Calendar Year