Some airlines such as Cathay Pacific have already issued travel waivers for Bangkok bound passengers due political instability in the country that appears to be leading to a military coup. 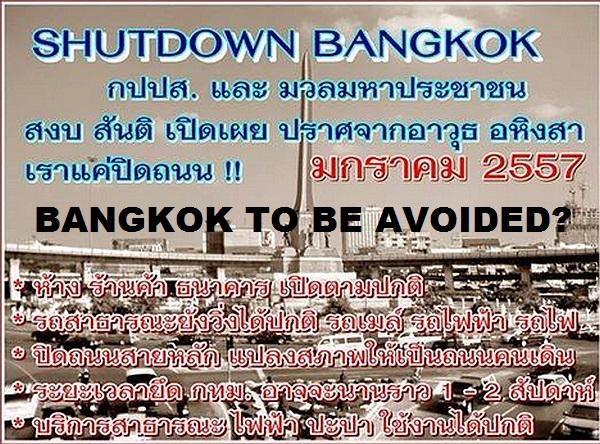 Yellow shirts want to oust the current prime minister, who is the sister of a former prime minister that has been convicted of fraud and is living in exile outside of Thailand. The red shirts are for the current government.

You can read more about the recent developments on Bangkok Post’s website here and and on the Nation’s website here. These are the two daily English newspapers in Thailand.

If you are risk averse, it would be better to avoid Bangkok until the military coup has taken place or past the election that has been scheduled for early February, 2014.

Note that all these protests are mainly happening in Bangkok. If you are planning to visit Northern Thailand, the holiday islands (Phuket, Samui etc), Hua Hin, Pattaya etc. there is really nothing to worry about besides getting to the airports in Bangkok in case that you are connecting there.

When I was in Bangkok past December, I never saw the protests unless I opened CNN or BBC. When the protests were going on the city was functioning pretty much normally, but most of the tourists were gone.

This time, however, it seems that their plan is to jam the roads and partially cut the utilities. Most of the western hotels should have their own back up generators, so electricity should not be off for more than few seconds.

It is probably not the best time to visit Bangkok unless you don’t mind slight inconveniences. The tourists are gone and you will have the sights/bars for yourself.

You should contact the airline or travel agent that issued your ticket, if you would prefer postponing your trip to Bangkok or maybe you could just switch to another destination in Thailand not affected by the demonstrations.