For the past week, I have been clearing out my email inbox that exploded in December. You can always email me (here) me questions and tips.

You have to be very careful with the eligibility of partner flights for mileage credit in the program(s) that you participate to. It is truly a minefield.

Things to keep in mind:

1.Always check the ticketed fare class of the partners’ flight for mileage credit. There are often fare classes that don’t earn anything or earn very little.

2. Oneworld carriers typically credit based on the MARKETING carrier (whose code you are flying) and Star Alliance based on the OPERATING one.

3. Check the fare class of the operating carrier. You may have been booked on United flight number on a flight operated by Turkish (this is just an example). The United fare class that is assigned to the UA coded, but TK operated flight, is not necessarily the same. The underlying TK fare class may not be eligible for full mileage credit.

4. Many programs require the flight to be booked on the operating carriers code to be eligible for mileage credit. You can earn miles for Virgin Australia and Etihad coded VA flights, but not VA operated flights that are marketed by other VA partner airlines.

My most annoying miles issue comes with Air China. They are part of staralliance, but sometimes they are also used for some oneworld flights, especially Finnair flights to and from Beijing.

If there is a Finnair flight operated by Air China, i do not tend to get miles back neither from Finnair Plus nor SAS Eurobonus programs…

Small, but some few thousand miles yearly become non credited. Don’t know what your experience tells in this case?

Air China is in Star Alliance and Finnair is in Oneworld. Air China has its code on some Finnair operated flights between Europe and China.

As Oneworld credits by the marketing carrier, you cannot credit these to any Oneworld plan. I thought that the reader might have had luck with Finnair, but alas not. 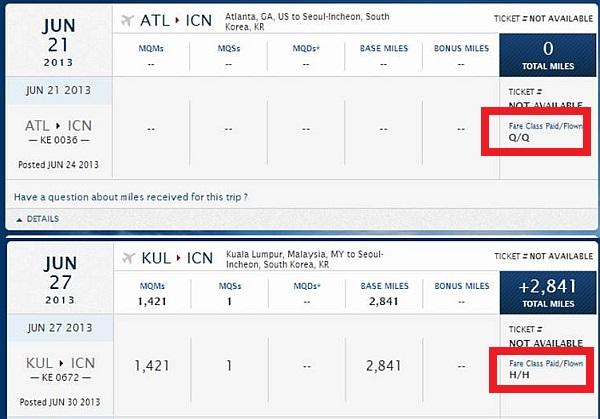 My problem occurred this year so please let me explain. I flew from Huntsville, AL to Atlanta on Delta, then I flew from Atlanta to Seoul, Korea on SkyTeam partner Korean air. I finally flew from Seoul to Kuala Lumpur also on Korean. I have flown from ATL to ICN on several occasions in the past and there were no issues in accruing mileage. But on this trip (June 2013), when miles didn’t appear on my account I inquired as to why. I was told that because I had flown on a Q fare, my trip didn’t qualify for any Mileage Qualifying Miles (MQM’s). Imagine my surprise at Delta after I protested with letters, emails, etc. but basically they didn’t budge from their position.

Delta changed the number of miles that you earn for Korean flights three times during the 2013. The last move to make all Korean flights ineligible for MQM and greatly reduced award miles credit.

You can find the Delta’s web page for earning miles on Korean flights here.

Q fare class on Korean was not eligible for mileage credit on Delta’s program, but the H was at the time the reader took the flight.

You really have to pay attention to the fare classes on partner airlines to ensure that they credit properly. These can also change number of times over the years or sometimes even three times a year in the case of Delta and Korean.

It gets really complicated with Star Alliance, where you would need to get the mapping fare class of the operating carrier in case of codeshares. You can usually get this from the travel agent, but good luck getting it from Expedias of the world.