It is now 2014 and hotel promotions are all back at full swing. There is something for everyone. Here’s my pick of top five for January 2014.

IHG Rewards Club fall 2013 promotion Big Win is returning for the spring 2014. You will get personalized offer based on your stay history with IHG. The promotion is valid until April 30, 2014. You can combine this promotion with other offers that I will be posting this week. 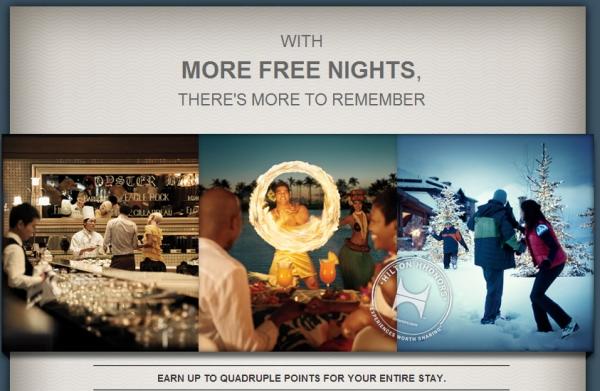 Hilton HHonors promotion “More Nights, More Points” is for double points for two night stays, triple points for three nights stays and quadruple points for stays of four nights or longer. You can combine this offer with number of airline related bonus offers as well.

SPG’s Bring On The Nights-promotion is valid for stays between January 5 and April 30, 2014. You can earn up to 15,000 Starpoints for your stays.

Marriott free night certificate offer will be on this top five list next month, when the new promotion kicks in on February 1, 2014.

If you happen to have the Club Carlson credit card that allows you to stretch the points, the promotion for 38,000 bonus points would be my top choice.

Hilton has allowed from 2018 Honors members qualifying for Gold or Diamond status in nights, but not in stays, to...

Welcome to our weekly video review on hotel suites and rooms around the world! This week’s edition features the King Deluxe...

Conrad Chicago has finally acknowledged that it is exiting the Hilton system on February 7, 2022, after being closed for...