The situation in Bangkok has now boiled over and the Thai government has issued a 60-day State of Emergency for the city. 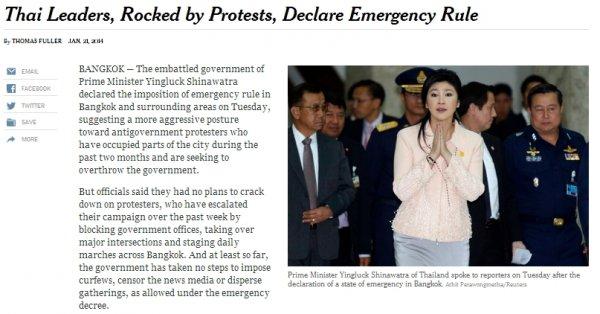 The demonstrations have started becoming more violent in recent days, with at least nine people having been killed and approximately 450 wounded. You can read more about the situation in this NYTimes article (access here).

You can read more about the recent developments on Bangkok Post’s website here and on the Nation’s website here. These are the two daily English newspapers in Thailand.

Here’s an excerpt from an article on CNN (access here):

In a bid to resolve the crisis, Yingluck dissolved parliament last month and called for new elections to be held February 2.

But the move has done little to appease protesters. They have called on Yingluck to step down from her caretaker position and be replaced by an unelected “people’s council,” which would see through electoral and political changes.

The opposition Democrat Party has said it will boycott the elections.

Christian Science Monitor has a good piece about the political issues in Thailand that have lead to these protests (access here).

The situation in Bangkok is getting worse and the city is likely best to be avoided by those that are not familiar with it, although no violence is aimed at the tourists.

The political situation in Thailand has been very volatile for the past few years and difficult to see how these two parties could reconcile.

I have no doubt that the current prime minister is just a proxy for her exiled brother, but they have won the public elections and will win the new one set for early February. The opposition would prefer a care-taker “peoples” government that wouldn’t be chosen by a public vote.

RQ: Who Is Responsible In Case Of Denied Entry?