US has been operating pre-clearance locations in Canada and some of the Caribbean islands from the 1950’s and in the Ireland since 1990’s. 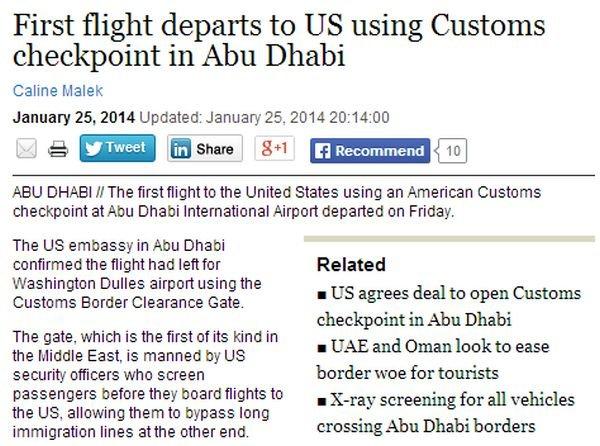 The UAE government promised to pay 80% of the costs of having the customs and immigration pre-clearance post at the Abu Dhabi international airport.

Many of the US airlines and pilot groups were against of opening the post due to no US airline flying to the Abu Dhabi. They say that the set up only benefits Etihad that has codeshare agreement in place with American Airlines. The pre-clearance at the Abu Dhabi airport is now open, however.

You can read more about this on The National’s website here.

The pre-clearance means that you clear both the customs and the immigration in Abu Dhabi and arrive then as a domestic passenger without having to go through any additional checks upon arriving.

This is definitely positive for those that travel to the United States on Etihad, as there is no need to stand inline sometimes for hours to get processed by the US immigration and customs. It is interesting to see if the much larger Dubai, where both United and Delta fly, will get the pre-clearance facility in the future.