This week’s Compensation Clinic case is about the Hotel Indigo Glasgow that illustrates how important it is to know the rules that the hotel must obey by the brand when negotiating compensation.

A LoyaltyLobby reader, who is a personal friend of mine as well, was checking into a three night stay when he was told that they don’t have a room for him for the first night and they were going to walk him.

When hotel walks the guest this means that the property is in an oversold situation and they have decided to move the guest to another hotel.

Back in on October 4, 2014, I wrote a piece (access here) about what the IHG affiliated hotels should do when they are in an oversold situation and the procedures including compensation that they must follow.

So, my friend was messaging me on FB Messenger at the time he was checking in to the hotel when they told him that they would move him to somewhere else for the night.

This should have never happened per the IHG “rule” book, as the hotel is never supposed to walk IHG Rewards Club elite members let alone a Platinum one.

The front desk first told him that they had booked him a room at the Holiday Inn. This is a first no no. You are NEVER supposed to walk the guest to a lower quality hotel. It should always be at the same or higher level.

I checked Expedia and the Hilton Glasgow, which is within walking distance from the Indigo and where I have stayed at, was available for the night. I told him that request them to book him there for the night and they agreed to it.

It was not a surprise that they didn’t want to book him to the Hilton first, as the hotel was charging 210 GBP for the night (based on the folio).

Here’s what the IHG affiliated hotel should do in case over walking a guest: 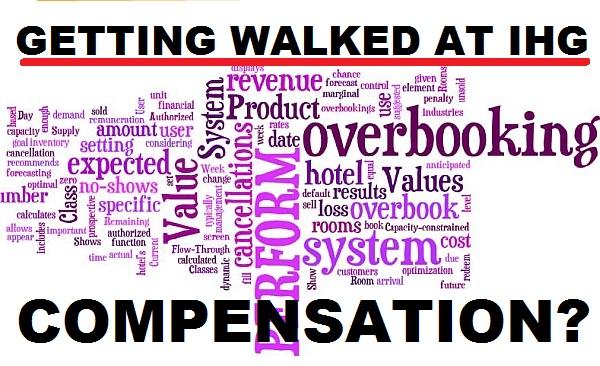 In the event an overbooking occurs due to an unforeseen stay over or any other circumstance, and a room is not available to a guest holding a reservation (prior to 16.00h), or a guaranteed reservation, the hotel must do the following:

The Guest Service Manager or MOD must meet with the guest and:

• Explain the circumstance and reason for the situation (i.e. guest staying over).

• Apologize to the guest and explain what will be done.

• The hotel must arrange and pay for the first night’s accommodations at another InterContinental Hotels Group hotel if available, or at another comparable and convenient lodging facility.

• The hotel also must reimburse the guest for any reasonable expenses incurred by reason of the change, including transportation and the cost of telephone calls to notify family.

• For 16.00h reservations, the hotel must reimburse the guest for the difference, if any, in the first night’s lodging rate, plus tax if the guest arrives by 16.00h.

• For Guaranteed All Night Reservations, the hotel must pay the full cost of the first night’s lodging rate, plus tax, at another InterContinental Hotels Group hotel or at another convenient and comparable hotel.

• If the guest has paid an advance deposit, this must be refunded to the guest in addition to the payments described above.

• If the guest is still not satisfied, the hotel is responsible for taking additional necessary measures to satisfy the guest, including but not limited to a free return stay at their hotel, etc.

• If a hotel does not deliver the guaranteed reserved and confirmed smoking/non smoking preference, the hotel must provide the guest with their first night’s stay free (room only).

The General Manager/MOD is required to personally contact the guest that night or the following morning by phone. They must:

• Apologize for the situation, and inquire into the guest’s satisfaction with the alternative accommodations.

Guest complaints are investigated and if the hotel is found to have not complied with these standards it will result in loss of CQI Guest Relations points.

By default, the guest is eligible for a free night at the Hilton, points & stay/night credit as if had been a paid night at the Indigo hotel + free night (30,000 IHG Rewards Club points).

The hotel first wanted to settle for two free nights (the Hilton night + one Indigo one) + 1,800 inconvenience points.

Note that it is always cheaper for the hotel to offer free night at their property, which doesn’t cost them anything, compared to depositing points to guest’s account that they need to pay for.

The hotel later upped the offer for two free nights + 10,000 points for the inconvenience. This is still short of the 30,000 points that he should have got, but would include a comped second night as well.

My friend was still not satisfied, as the hotel first try to “cheat” him and wasn’t very straightforward with the compensation offered. The GM of the hotel was also on “vacation” and someone else was trying to handle the problem and it’s resolution.

The hotel relented and decided to comp the entire three nights, waive the F&B charges and give 10,000 points for the inconvenience. My friend was satisfied with the offer.

The walked stay at the Hilton property posted to his Hilton HHonors account as a paid stay with appropriate number of points for the 210 GBP folio amount.

The comped three nights posted as a paid stay to his IHG Rewards Club account, as they should have, including the promised compensation of 10,000 points.

So, I have lived the last 10 years at hotels and been walked only ONE time by Grand Hyatt Atlanta that didn’t have a reserved room for a Diamond member over all Priceline guests that had checked in for the night.

The key here is that you absolutely need to know what you are entitled to in case you are walked. I have seen situations where the hotel front desk clerks have said to some guests that we are sold out tonight, but we are moving you to our sister property, without offering anything not even a complimentary night. I would say that hotels get away with this most of the time because guests are not educated what their rights are.

As it was documented above, the hotel tried first minimizing the financial hit by moving the guest to inferior IHG property and not giving enough points that the guest was entitled to by the IHG “rules”.

The walked guest was IHG Rewards Club Platinum member that should have ABSOLUTELY never been walked by the hotel. There is no other reason for this walk other than that the hotel really must be very disorganized.

I am happy that they did deliver at the end. My friend got some Hilton HHonors points, three nights free in Glasgow (one at the Hilton and two at the Indigo), stay/night credits + points to his IHG Rewards Club account as if the stay had happened without problems + Hilton HHonors one as well, another 10,000 points thrown in for the problems + F&B (food and beverage) charges waived.

IHG did some extensive maintenance this past weekend, and some IHG Rewards members have not been able to sign into...

Kimpton Hotels have now officially launched the first part of their usual Annual Sale that goes online late this month....

A LoyaltyLobby reader sent us a message about being unable to log into their IHG Rewards account with 2.5M points...