Virgin Atlantic has been flying from London to Sydney since 2004 via Hong Kong. The airline has now announced that it will nix the HKG-SYD-HKG from May 4/5, 2014.

The last flight from Hong Kong to Sydney will operate on May 4 and from Sydney to Hong Kong on May 5, 2014. 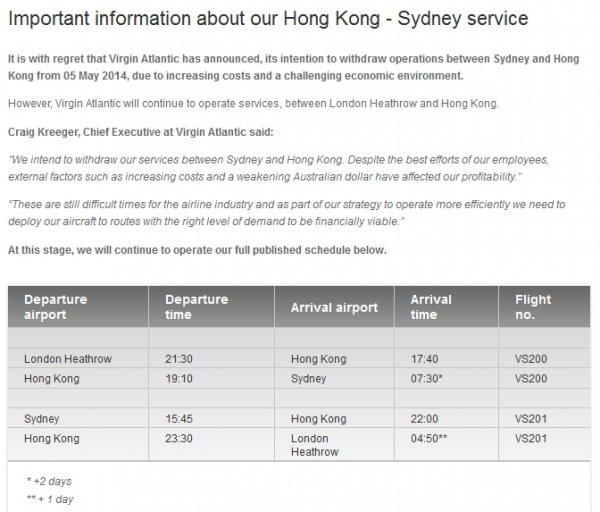 The Virgin Atlantic flights HKG-SYD and vice versa have been good use of Virgin Flying Club miles in business class and I have been contemplating to redeem some next time I need to get to Australia. But this will be unlikely now that the airline stop operating the route from May 4/5 onwards.

Undoubtedly, the UK airlines (BA & VS) have faced increasing competition for the traffic between UK and Australia from the Middle Eastern airlines such as the Emirates, Qatar and Etihad that must have put downward pressure on the yields.

These fifth freedom “tag” flights long away from their home for both British Airways and Virgin Atlantic have been rumored to be challenging.