Expressen: “The truth about the luxury of Qatar Airways“

A friend of mine, who works for one of the airlines in North America, posted a link to this Expressen article about the state of crew affairs at Qatar Airways few days ago. 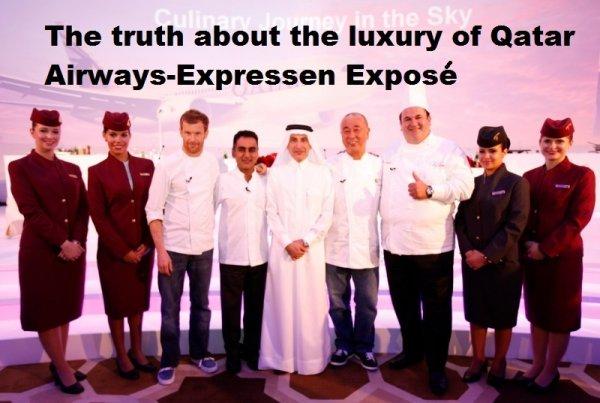 Back in October, I wrote about the human rights issues (or lack of them) in the GCC countries. Qatar Airways was featured in that article as well that you can access here.

Now, the Swedish Expressen newspaper has written a long piece about how badly Qatar Airways treats it’s employees. You can access the article on Expressen’s website here.

This is really a long story about the lives of two flight attendants and a captain, who used to work for Qatar Airways.

The pilots are my chauffeurs, they only come to you to f**k you,” Javier once heard CEO Akbar Al Baker declare during a welcome speech.

Later this makes her somewhat nervous, as Al Baker has been known to summon selected girls up to his hotel room and shower them with gifts, such as an iPad. From more distant rumours, Saga has heard of girls being fired for not replying to Al Bakar’s private text messages to their mobile phones. Nothing like that happens on Saga’s PR trip to Oslo Instead, the group eats dinner in silence. The cabin crew and Al Baker.

She quickly goes to an ATM. Here, she withdraws 10,000 riyal. She has been working for two years. No complaints have been filed against her. On the contrary, she has been promoted and been given special assignments. But she knows that if she doesn’t withdraw her entire salary right now, Qatar Airways can freeze her local bank account. She has been detected.

Every conversation about the flight attendants’ lives in Doha strays onto the much more visible group that assists them and all the other workplaces in the country. How Southeast Asian slaves are made to guard flight attendants who are confined in luxury with a passable salary creates a complex balance of power. Can a slavery system include a middle class?

“There was a period about eight months ago when four staff housing buildings were more or less emptied. Every time you were hanging out with another stewardess, mobile phones kept ringing: she’s off, now she’s off. I was talking to a friend one day when six of the girls in her building had been fired in the same week.”

The company’s sudden redundancies are as constant as the international recruitment days every weekend. Stewardesses are fired for wanting to change room mate, for posting an inappropriate Facebook status, for getting a tattoo that colleagues then sneak a photo of and show the company as proof, for returning to the housing five minutes after curfew, for letting a man that they know who is neither their husband or father give them a lift to work, for smoking a cigarette during their time off.

It is no wonder why the airline is unable to attract flight attendants from western countries and mainly hires from Romania and Asia. Who on their right mind would go to work for an airline that treats their staff like this if they have a choice?

The newspaper also alleges that the CEO of the airline treats the flight attendants as his personal harem on PR trips.

So, when you travel in the Middle East, have a look who are the ones doing all the work? Mainly immigrant workers from Nepal, India, Sri Lanka, Philippines, Indonesia etc. Some of the businesses there treat their employees as replaceable modern day slaves. Their passport is confiscated at the time they enter Qatar and they can only leave if the employer agrees to it.