Here’ my pick if five best hotel promotions that you can take advantage of this month. 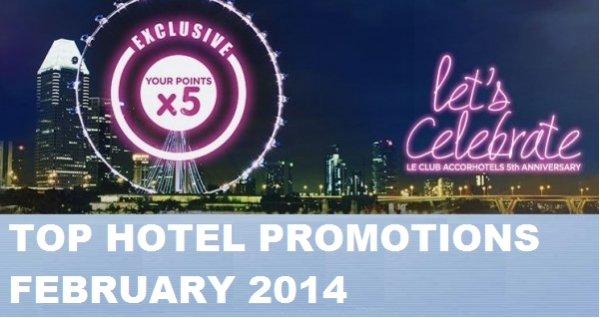 IHG Rewards Club fall 2013 promotion Big Win has returned for the spring 2014. You will get personalized offer based on your stay history with IHG. The promotion is valid until April 30, 2014. You can combine this promotion with other offers that you can find here.

Marriott Spring MegaBonus has free night certs or bonus points. I like the offer for cat 1-5 cert for every two stays. There is separate MegaMiles offer as well.

Hilton HHonors offers 1,000 bonus points for every night + 5,000 additional bonus points for two weekend nights. You can combine this with the following two offers if you are staying at Conrad or Waldorf-Astoria properties.

Le Club Accorhotels is offering quintuple points for one stay to celebrate the 5th anniversary of their guest loyalty program. You maybe able to combine this with the following two additional offers.

Le Club Accorhotels Promotion For Double Points For A Stay

I am checking the stacking of the three Accor offers later this week and maybe try to combine that with the triple miles offer for British Airways too. Should be interesting to find out what posts after the stay and how many Avios is eventually received at the BA’s end.