Whine Wednesdays: Standing In The Aisle

A couple of months ago, I wrote about the very serious baggage carousel syndrome (access here) and this standing up in the aisle while we haven’t properly pulled up to the gate or apron position yet… is as serious. 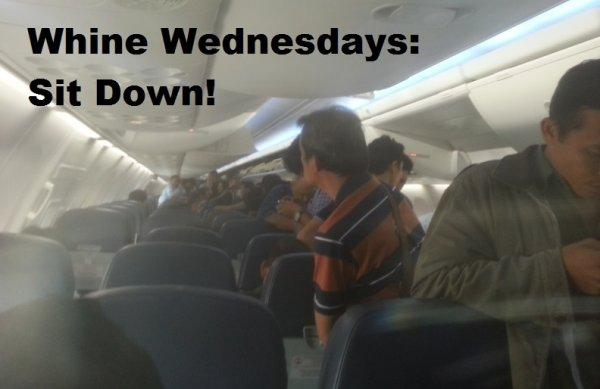 Why do some people need to start opening the overhead compartments when the aircraft is still taxiing on the runway and stand up when the airline hasn’t even reached the gate?

This tends to be epidemic with the airlines based in the Middle East and Indian Subcontinent, but apparently affects Indonesia as well.

Yesterday, I took Lion Air flight (we landed safety) from Denpasar to Jakarta and some people were opening overhead compartments while still taxiing to the gate (apron position).

I was just sitting in my seat and browsing the web, while most of the plane was cramped in the aisle waiting for the plane’s doors to be opened that seemed to take close to 10 minutes, as Lion Air had to get buses to bus us to the terminal gate.

Sit back and relax not just during the take off, but during the landing and while taxiing to the gate as well. Also, there is no need to stand in the aisle if the doors are not open or if there is a line. I rather observe other people’s behaviour from my seat.