Marriott Rewards has a new promotion for stays at 50 participating properties in the UK between February 14 and April 28, 2014. 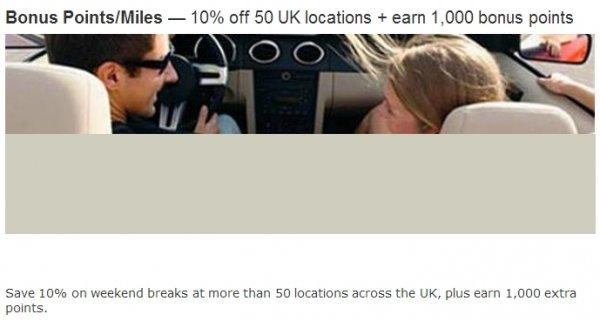 You can receive 10% off and 1,000 bonus points for stays of 2 nights or longer. This offer is valid Thursday to Sunday nights.

You can access Marriott’s web page for this offer here.

Note that you must book a rate using promotional code M41 to be eligible for the discount + the 1,000 bonus points. 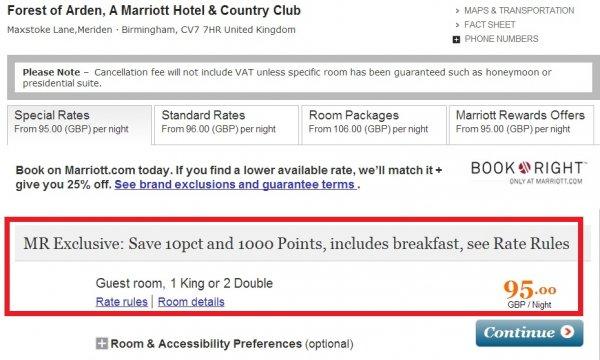 I had to go through four/five properties before I found one that had the rate plan properly loaded. The 10% discount is from he breakfast inclusive rate.

If you are planning to stay at any of these 50 properties during the promotional period, you should chec k if the promo is available and the rate competitive.

Gold and Platinum elite members would get a complimentary breakfast anyway, so it is bit sneaky for the property to offer the discount only from rates that already includes it.

Minimum 2 night stay required Thursday – Sunday nights. Guest must book reservation using promotional code in order to receive the bonus points. Rates and discounts may be applied to one regular room per stay, per member, based on double occupancy on dates listed. A “hotel stay” or “stay” means all consecutive nights spent with Marriott by a registered Marriott Rewards member. Rates and discounts not available during special events. Offer not available to groups of 10 or more rooms. Tax is additional and rates may not be combined with any other offer or discount. Room rate does not apply to meeting rooms. Blackout dates may exist and advance reservations are required.