You know that things must be really really bad when loyalty program emails to its members about restructurings happening with the company. The head of Qantas Loyalty did that. 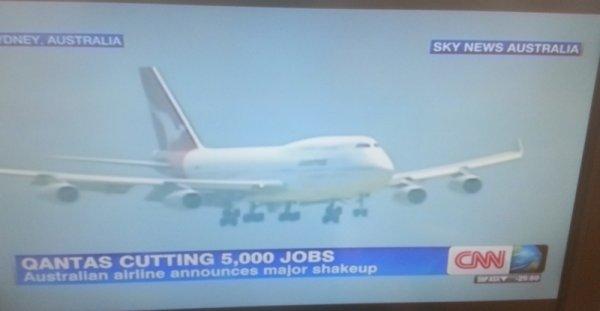 Qantas made an announcements today that it will shed 5,000 jobs, drop some routes such as Perth to Singapore, defer Boeing 787 and Airbus A380 deliveries, and plans to cut its fleet by 50 aircraft.

You can read more about these developments on BBC’s (here), WSJ (here), or New York Times (here).

Qantas announced that it had made a pre-tax loss of A$252 million in the July to December period in 2013.

Qantas want’s the Australian government to lift the Qantas Sales Act that limits the foreign ownership of the airline to 49%. Qantas’ domestic rival Virgin Australia is partially owned by Etihad, Singapore Airlines and Air New Zealand.

The airline will also slow/suspends the growth of its Jetstar discount carrier. The airline have had problems getting the Jetstar Hong Kong off the ground.

When I was looking to issue an award ticket from South Pacific to Denpasar using AA miles on January, I realized how limited the Qantas’ international route network really is. Its low-cost arm Jetstar has taken over many of the routes.

Let’s hope that Qantas can gets its act together. Nobody wants the Qantas to go the way of Ansett.