Hilton had its first quarterly earnings call this week after going public again. The CEO had made some comments about selling part or all of Waldorf-Astoria New York to a Bloomberg reporter. 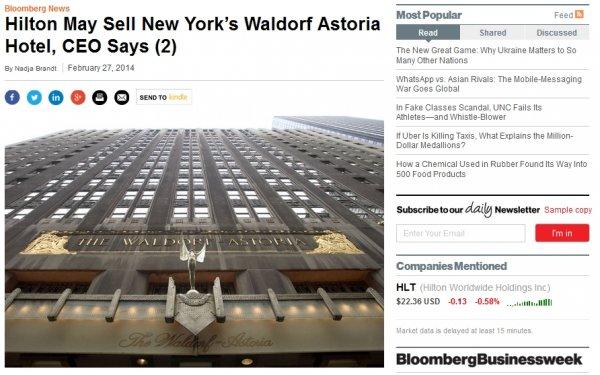 Waldorf-Astoria New York is one of Hilton’s flagship properties along with the Hilton Hawaiian village.

“We may look to reposition the hotel,” Nassetta said in a telephone interview after the McLean, Virginia-based company reported fourth-quarter earnings. “We are still deciding on how we may reposition it and who we may reposition it with. Part of this would require capital, so we would look at the option of selling all or a stake in the hotel.”

Hilton is considering residential, office and retail uses for the Park Avenue property, Nassetta said. The 1,232-room hotel is so large that it has hurt Hilton’s ability to charge luxury-level rates, said Nikhil Bhalla, an analyst at FBR & Co. in Arlington, Virginia. Rooms at the 82-year-old hotel start at $279 for the week of March 3, according to the its website.

“It’s a tired hotel,” Bhalla said. “It needs an overhaul. If they added condos, that could work. The residential market is hot in New York, it would make the most sense, but office can make sense too because of its location on Park Avenue.”

Seems that the plan is to downsize the hotel in number of rooms and use the space for condos, retail and office space. I am still missing the Park Hyatt Stanhope (New york) that was converted to condos.

Unlike many of its rivals, Hilton still owns many of its flagship properties. Most of the hotel companies have tried to move to the asset “light” strategy by offloading the real estate holdings to investors/REIT’s and just manage the hotels under long terms contracts.

I have not stayed at this Hilton property, but friend of mine was there over the Super Bowl weekend and posted some photos on his Facebook page. I commented that the suite’s décor was grandmotherly.

Maybe it would be a good time to pay a visit to this property before the room rates double/triple?