When I was going to see a movie (Non-stop) here in Jakarta last night, I had no idea that it was going to be an airline hijacking thriller set on British Aqualantic (couldn’t make that name up) flight from New York to London. 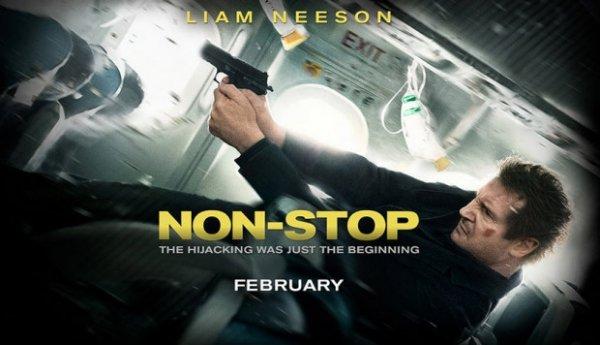 Liam Neeson is playing an Air Marshall on that flight and things start going very wrong very fast. I can guarantee that you will NOT see this movie on an airline AVOD anytime soon.

Here’s part of Variety review that you can access here:

Continuing his prodigious run of duosyllabic, Euro-financed action movies, Liam Neeson is back with a gun in his hand and a weary grimace on his long Irish mug in “Non-Stop,” a sometimes inspired, mostly serviceable doomed-airliner thriller that reunites its star with “Unknown” director Jaume Collet-Serra for another round of pseudo-Hitchcockian hijinks. Lacking anywhere near as clever as script this time, Neeson and Collet-Serra put this wronged-man programmer dutifully through its paces, with plenty of the gruff machismo and close-quarters grappling that have made the 61-year-old actor a late-career global action star. (Can an “Expendables” cameo be far in the future?) Turnstiles should click briskly for this Studiocanal/Joel Silver co-production, which opens overseas today, 48 hours ahead of its Stateside bow.

I normally cannot stand movies that are set on airplanes, but this was quite ok. I ended up checking my emails only twice during the movie and didn’t feel bored, as I did with the Oscar contender Gravity (one of the most boring movies ever made).

This movie won’t leave lasting impact on your life and you will forget it in a day or two. But if you have couple of hours to spare and need something to keep you entertained, it is a good choice.