I thought that it would be the right time to have a new weekly feature on Fridays about airline and hotel award success stories and I will start it by featuring my award for five days at the Sheraton da Bahia.

You can email me yours (here) and I will feature the best ones in the coming weeks. 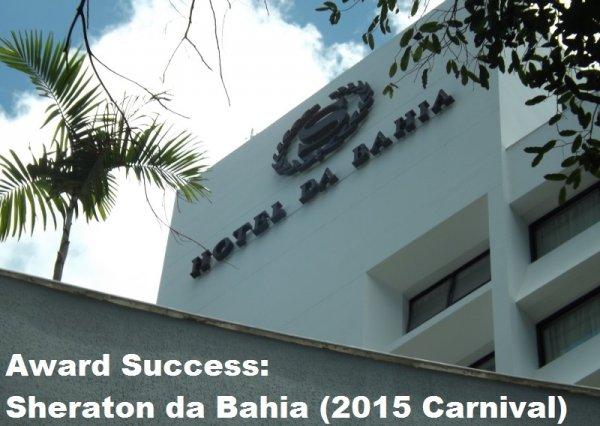 I have been to Carnival in Salvador previously in the mid 2000’s and struggled to find an acceptable hotel to stay at. As a matter of fact, I ended up staying in a “love” motel close to the historic city center.

Sheraton da Bahia doesn’t have any rates loaded for the Carnival period and initially shows the awards unavailable as well.

If you however, choose the dates, the availability pops up even for the blocked dates.

The Carnival in Salvador da Bahia is very different from the one in Rio de Janeiro and features trio electricos.

Salvador da Bahia is a fantastic city (the first capital of Brazil) and worth a visit outside of the Carnival period as well, when the hotel rates are far more affordable.

Like in Rio, hotels in Salvador try to sell you multi-day package at exorbitant price compared to “normal” rates.

The hotels are really sold -ut only for a day, but hotels have minimum stay requirements to try and stretch the higher rates for a number of days before and after Carnival.

I cannot remember the previous time I have redeemed Starpoints for a hotel stay due to highly inflated hotel award categories, but they work ok in situations such as this when there is a citywide even going on and rates are put through the roof.

My personal preference is usually to stay away from cities that have a citywide event such as Carnival or the Olympics going on. I do have a few friends that wanted to go to the Salvador Carnival and I decided to join them.

I have stayed at this Sheraton Bahia hotel when it was under the local Tropical brand and thought that it was a rather unremarkable hotel, but the best one in he Salvador city center.