Last week, I wrote about an ABC News piece where a former baggage handler was telling what REALLY was going on at the airports (access here). 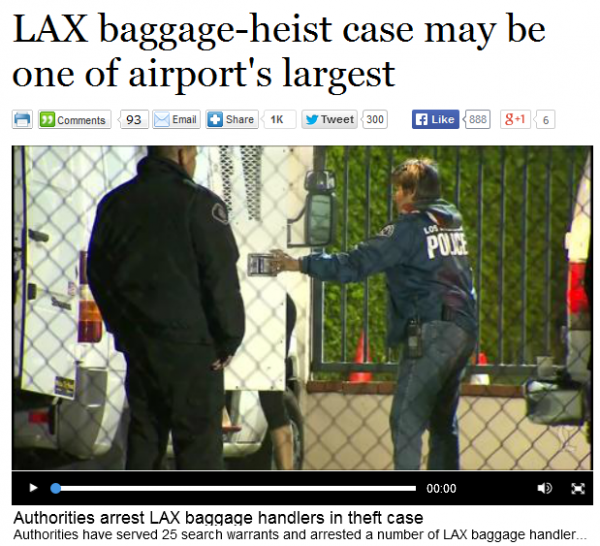 This week, there was this article in the LA Times about a ring of people that had been (or maybe some still are) working for Menzies Aviation at the Los Angeles International airport. They had gone though checked bags stealing the valuables and then selling them on sites such as Craigslist.

Here’s the reason why it is always important to report any theft:

“We have multiple companies that deal with baggage at the airport for  airlines. But one company had more reported thefts in their terminals than the others and so we began investigating their baggage workers,” said Los Angeles International Airports Police Chief Pat Gannon. “At any airport there are always theft of baggage, but we knew this was prevalent at Bradley and Terminal 4.”

It is pretty easy to figure out that something is going on if the number of reported thefts is statistically much higher compared to other terminals at the same airport.

Just a reminder. Don’t EVER check in any valuables that you couldn’t afford to lose or something that is irreplaceable.

I must have been very lucky over the years, as I have never had any bag completely gone missing (many delayed bags but I am always willing to collect the ca$h comps) or anything stolen from checked bags.

Once, I did a 7 week long around the world trip and Air Canada left my bag for the entire trip in Montreal. The bag arrived to the origin destination one day before me.