The Protea Hotels has 79 properties in South Africa and 37 in other countries. 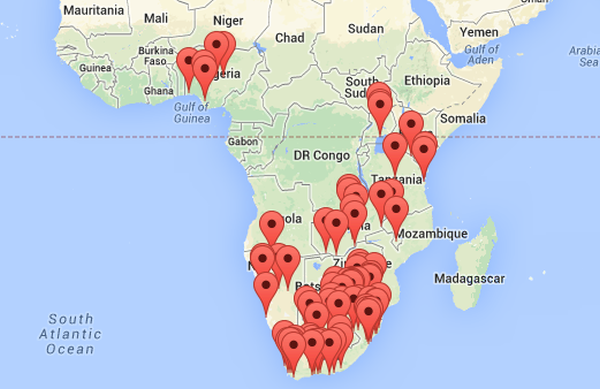 Marriott’s plan is to have Protea hotels bookable on Marriott.com by the end of May and have them to join the Marriott Rewards program by a later date.

Right now all Protea Hotels are excluded from the Marriott Rewards program per the terms and conditions (access here) update above.

Bethesda, Md., USA  and Cape Town, April 1, 2014 – Marriott International, Inc. (NASDAQ: MAR) today became the largest hotel company in Africa according to published information, and nearly doubled its presence in its Middle East and Africa region to more than 160 hotels and 23,000 rooms as it completed its acquisition of the 116-hotel Protea Hospitality Group (PHG), based in South Africa.  Marriott now operates or franchises more than 4,000 hotels in 79 countries.

At the same time, Marriott said that its pipeline of new hotels in the Middle East and Africa, including Protea’s pipeline, is now more than 65 hotels and 14,300 rooms, including more than  20 hotels and 3,000 rooms in Sub-Saharan Africa.

Arne Sorenson, Marriott International’s president and chief executive officer, said, “Today marks a new beginning.   We can now officially say ‘molweni!’ (Xhosa), ‘sawubona!’ (Zulu) and ‘hello!’  to South Africa and ‘welcome!’ to our approximately 15,000 new associates at both managed and franchised hotels across Protea’s portfolio.   We look forward to integrating the superb Protea team into the Marriott International family, and together, to work toward new opportunities for growth and advancement throughout  South Africa and the continent.”

Alex Kyriakidis, president and managing director of Marriott International’s Middle East and Africa (MEA) region, said, “Today is the culmination of months of highly productive collaboration between Protea and Marriott International teams.  We are delighted that such a tremendously dedicated, talented and effective team, which has been so well-led by Protea Chief Executive Officer Arthur Gillis, is now joining the Marriott International family.  With the addition of Protea’s regional knowledge, expertise and infrastructure, we are incredibly well-positioned to continue growing in one of the fastest expanding economic markets in the world.”

According to the World Bank, Sub-Saharan Africa is expected to grow at a more than 5 percent pace through 2015.

Marriott expects that the Protea portfolio will be available for booking on Marriott.com or via Marriott International’s Global Reservations Centers toward the end of May, and the hotels will join the Marriott Rewards guest loyalty program at a later point, to be announced.   Until then, please go to www.Proteahotels.com for reservations.

Marriott does not expect the Protea acquisition to have a material impact on 2014 earnings.

Marriott’s presence prior to this Protea purchase in Africa was non-existent outside of Egypt and one property on Algeria. It is interesting to see if the three Protea brands are here to stay or if Marriott will rebrand some of them under the current brands.

Let’s hope that these properties will become part of Marriott Rewards program rather soon. There is really no incentive for any Marriott Rewards member to stay at them before you can earn and burn points and receive status related benefits.