Wall Street Journal has very interesting article about the current state of Southwest Airlines that used to be a low price leader and considered one of the non-legacy airlines.

I guess that it is difficult for Southwest to be considered an upstart airline when it was found 43 years ago.

Here are some interesting tidbits from the article: 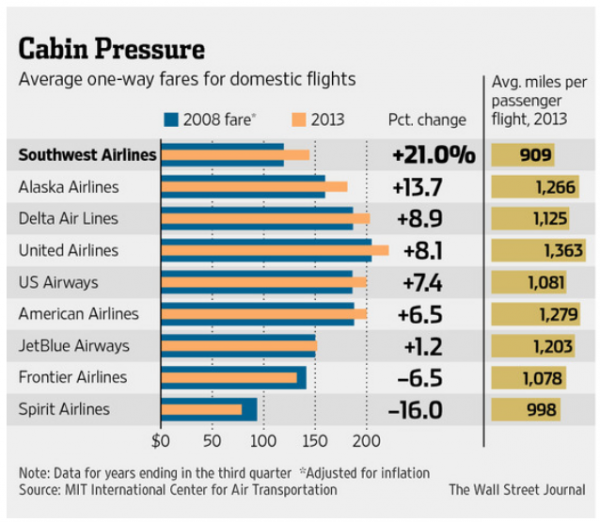 With its growth stalled, Southwest can’t hire as many new employees at the bottom of the pay scale. From 2007 through 2012, Southwest’s cost to fly a seat one mile rose 42%—more than any other major U.S. airline, according to Massachusetts Institute of Technology data that adjust for flight distance.

Its low fares, long the core pitch to customers, aren’t so low anymore. Its average one-way fare was $144 in the year ended in September, a 21% increase over the same period five years earlier, when adjusted for inflation. That compared with single-digit increases at larger rivals and big price cuts at new ultra-discounters like Spirit, according to the MIT data.

Perhaps Southwest’s biggest challenge involves its 45,000 workers, who long have enjoyed unparalleled job stability and compensation. About 83% of its workers are unionized, and Southwest is currently in negotiations with nearly all of them over new contracts—some of which seek to freeze pay scales.

The average Southwest worker earned nearly $100,000 in 2012, including pension and benefits, compared with about $89,000 at a traditional hub-and-spoke airline, according to MIT. Southwest also shares profits with employees, paying them $228 million last year, or more than 6% of their pay.

“It is harder today for us to claim that we are the low-fare leader than it was before because our cost advantage has been narrowed,” Mr. Kelly says. “And that is exactly what we want to make our employees understand.”

For its nearly 17,000 ground workers and customer-service agents, Southwest wants to tighten rules on sick time and largely hold compensation flat. In prior contracts, workers generally received raises. It also ultimately wants 40% to be part-time, meaning their families would have to pay more for health benefits.

If you are a Southwest Airlines flier, the WSJ piece is definitely an interesting read. When the price of the oil rose in the early 2000’s, Southwest was mostly shielded from it due to its lucrative hedges.

It is very difficult to be a low price leader, when you are paying higher than industry average wages for your employees.

But it is difficult to see how Southwest could transform 40% of its ground employees to be part time and have them providing the same level of service than full time ones? Certainly the employee turnover would go through the roof?

One of the Southwest’s problems is that all of the legacies went through the chapter 111 bankruptcy proceedings and some more than once. This allowed Southwest’s competitors to shed liabilities and reduce employee pay.

It is certainly interesting to see how Southwest will develop in the coming years. Seems that the airline is starting to go through the midlife crisis.