There have been a few unannounced program devaluations over the years mainly from 2nd/3rd tier airlines based in less developed countries.

I wish that I would have something positive to say about the changes that American Airlines instituted yesterday without any advance notice but I don’t.

I probably wasn’t the only one that thought that American Airlines would have some class and dignity to give proper advance notice about the program changes to its frequent fliers.

From now on, I don’t have any trust left for the new American Airlines that merely is the old US Airways with the name changed and soon old planes painted over. 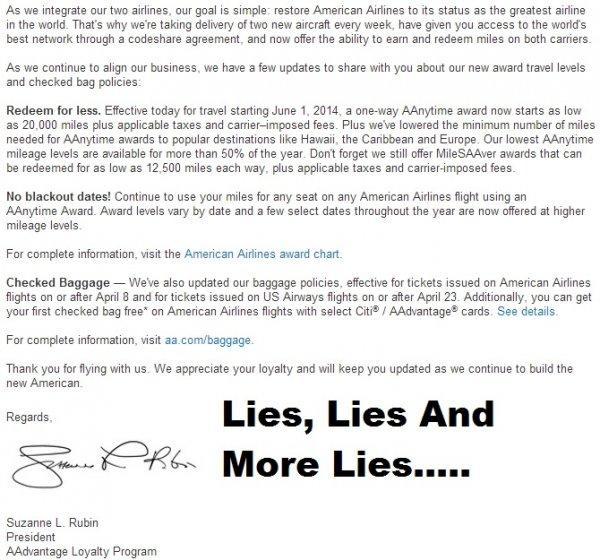 It is sad to see the President of “loyalty” Suzanne L. Rubin sending such a garbage email yesterday with zero information about the real changes and only spinning words and hinting to those that can read between the lines that the changes are net negative for all AAdvantage members.

Here’s what President of loyalty Suzanne L. Rubin forgot to mention on her email:

1. The new AAnytime awards are so expensive that American hasn’t even published the Level 3 pricing.

2. American has eliminated the possibility of having a stop-over at the North American Gateway city effective immediately.

4. The “enhanced” baggage policy means that American Airlines AAdvantage Gold members are now eligible for only one checked bag.

Don’t you find it remarkable that she managed not to touch ANY of the changes that are all negative for the Aadvantage members?

How on earth I was so naive to think that American Airlines would do the right thing and give proper advance notice about the program changes to the loyalty program members?

I have never seen any other US-based airline trying to push through a major change like this to their loyalty program without giving any notice to program members!

Why is the communication from American Airlines suddenly so bad? Why try to spin the issue on hand and not openly tell program members about the changes?

Is the need to lower the future liability of the outstanding miles on the books so great that robbing the frequent fliers like thieves is justified? American Airlines can likely lower the book value of outstanding miles after this change and book-realize a one time gain.

I have zero faith that American Airlines won’t next change the Onworld and Other Airline Award Chart in due course without any advance notice. I would also expect that we will soon hear about the changes coming to the AAdvantage elite program qualification for the 2016 membership year.