Few years ago, the DOT (Department of Transportation) required that the airfares advertised in the United States should always be inclusive of all taxes/fees.

Now, the airlines are trying to lobby the house that the airlines wouldn’t be required to include these taxes/fees on the advertised/displayed base fares. 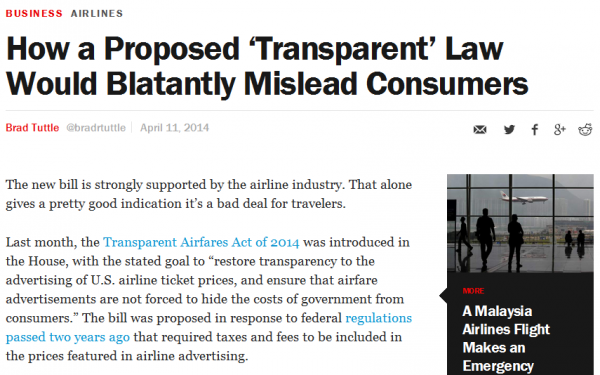 The airlines claim that this would be more transparent as the consumers could easier see the amount of taxes/fees of the total airfare. This is, of course, nothing but a blatant lie.

Here are some entertaining tidbits from the Boston Herald’s piece:

Lie Number 1: Consumers want this information. Not true: I know of no credible consumer advocacy or business travel group that wants this change, and the most important ones all oppose it.

Lie Number 2. “Government fees and taxes are hidden from the public.” No, airline fees and taxes are not “hidden” under current rules; airlines post them in easily accessible pull-down menus or other statements clearly and openly for anyone who cares.

Lie Number 3. “Virtually all consumer products are advertised at a base price, with taxes added on at the point of purchase.” Again, not so. The only taxes traditionally added at the point of purchase are state and local sales taxes, which do not apply to airline tickets. Federal excise taxes and user fees, on the other hand, are routinely included in the base prices on all products to which they apply: The biggest federal excise taxes are on gasoline, tobacco products and alcoholic beverages, and those taxes are always included in the posted prices you see where you buy them

Lie Number 4: The bill will “restore transparency to the advertising of U.S. airline ticket prices.” No, you don’t have to be an astrophysicist to figure out that the bill will obscure the total cost of travel, not make it more transparent.

This is nothing but yet another attempt for the airlines trying to hide the true price from advertised fares that they used to do. They certainly would love to hide those nasty scam charges (mainly fuel surcharge).

I like the fact that US and European union require airlines to advertise all inclusive fares. As I spend quite a bit of time here in Asia, I absolutely hate when airlines advertise $30 fares when they suddenly are $300 to $500 when all the taxes/fees/surcharges are factored in.

The airlines should be ashamed of trying to push a bill like this through that does nothing else than to obscure advertised airline fares.