There was an accident on a Cathay Pacific flight from Amsterdam to Hong Kong back in February when one of the passengers had made a demand to land in Sochi. 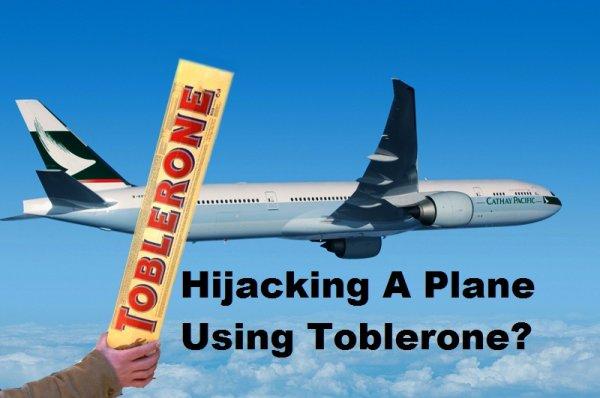 The passenger had waived a Toblerone bar in a sword style whilst making the demand.

You can read the story on South China Morning Post’s website here. 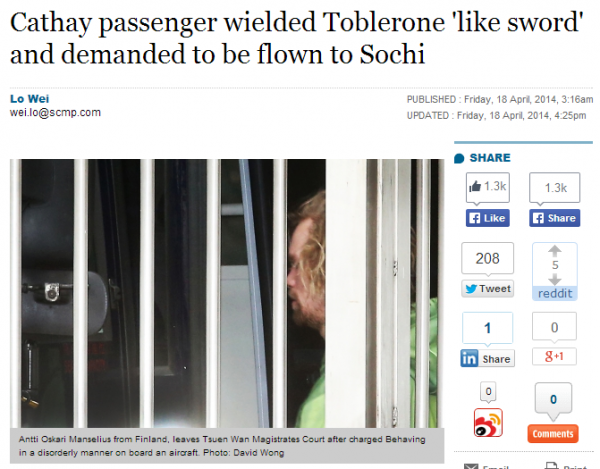 A passenger accused of making a hoax bomb threat on a Hong Kong-bound flight wrapped his head in two blankets, waved a chocolate bar “like a sword” and demanded the plane be diverted so he could watch the Winter Olympics, a court heard yesterday.

Armed with a large Toblerone bar, Antti Oskari Manselius, 23, from Finland, informed flight attendants he was “robbing” the plane and demanded the Amsterdam-to-Hong Kong flight be redirected to Sochi, Tsuen Wan Court heard.

The passenger’s head was wrapped in two economy class blankets, leaving only his eyes visible, and he wore another blanket on his back like a cape. In one hand was a large Toblerone chocolate bar that Manselius was “grasping like a sword”, said Luk.

“He said, ‘I am robbing the plane now. I want to see the Olympics in Sochi and I need to get off the plane now,” recalled Leung. “He was furious. He made me feel like he was trying to endanger the aircraft.”

It never came to my mind that one could use a Toblerone bar on a such violent manner that someone could take a possible threat seriously. Obviously the passenger had had few drinks too many or was mentally unstable.

While the state of the passenger was definitely the issue, hopefully Toblerone or other “sword-like” chocolate bars will not end being prohibited in carry-ons.