A couple of weeks ago, I had an overnight stay at the Sheraton Ningbo. I had stayed at the Westin Ningbo on my previous visit to the city and decided to check out the other Starwood option as well. 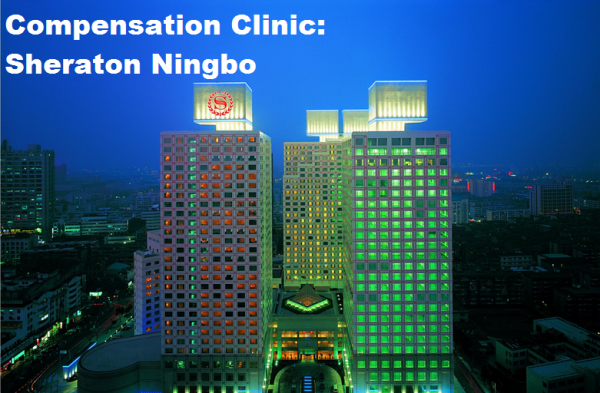 This is one of the older hotels in the city but it is still an acceptable choice, although of the Starwood options the Westin is clearly better.

Here are some issues that I had during my stay:

1. Room was supposedly non-smoking but had heavy smoke odor.

2. Changed the rooms and wanted to make sure that the laundry gets delivered to the new room, but the club lounge attendant was not able to comprehend my request (was later fixed).

3. Temperature in the fitness center was around 27 Celsius, that is way too hot. Manager didn’t understand when I asked him to check what is the temperature set by the Sheraton Brand Standards manual.

4. I had requested that my room key works until 4PM (per Platinum benefit), but it was dead at 3:45PM when I was trying to get back to the suite from the fitness center.

5. Laundry had been delivered to the suite even when I had the Do Not Disturb Sign on the entire time I was at the fitness center.

6. I requested the concierge to tell the taxi driver the address to the InterContinental hotel. The concierge asked from me if I knew it (let me Google that for you). Shouldn’t the concierge be aware of the internationals hotels in the city?

I sent an email about these issues to SPG’s corporate customer care after my stay with a request of 4,000 Starpoints that is enough for a free night at same category hotel. I received the points but never heard anything back from the hotel.

This was pretty much like any other stay I had with the Western branded hotels in China. One problem after another that really gets irritating after a while.

Again. I am not blaming these customer service facing employees but the management that obviously has not provided adequate training thus resulting in a failure to deliver the designated level of service.