Switchfly released its 5th annual reward seat availability survey yesterday that can be used as an indicator what economy award seats are bookable on airlines’ own websites. 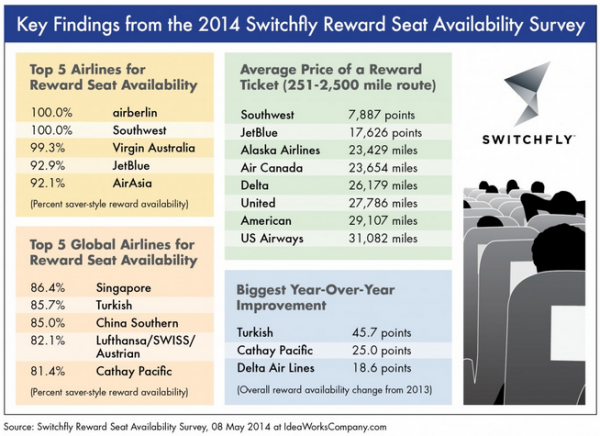 Due to the methodology used, the airlines with most award availability were generally those that dynamically price awards based on the price of the specific flight (Southwest, JetBlue, AirAsia etc).

You can access the report here or read a WSJ piece about it here.

The devil is always in the details and you must read the survey methodology to fully understand the results:

1. All the award searches were done for two people traveling in economy with a Saturday night stay.

2. Results were only for award trips that were bookable online on the airline’s website.

3. “The top 10 routes (based upon total seats offered for sale during a 12 – month period) longer than 2,500 miles and the top 10 medium – haul routes (251 to 2,500 miles) were selected for each airline. Alaska Airlines was switched to this methodology for 2013 due to the carrier’s increased emphasis on the Hawaii market. Due to a lack of long – haul routes, the top 20 overall routes were queried for these airlines: Air Asia, GOL, JetBlue, Southwest, and Virgin Australia. Ten top Europe – Palma de Mallorca city pairs (out of 20) were substituted for airberlin to reflect the carrier’s major Mediterranean emphasis on holiday flights.“

The survey also doesn’t indicate airlines that charge very high fuel surcharges on all the awards that they issue. Redeeming for economy awards on these airlines such as the Lufthansa group rarely make any sense because sometimes the taxes/fees on award tickets are higher than a paid ticket on the very same flights.

Switchfly sells/provides technology to the airlines dynamically price awards, so the survey conducted by IdeaWorks could be biased.

As I pointed out above, the airlines that dynamically price their awards should have them available in all of their flights.

The same survey methodology was not used for Air Asia, GOL, JetBlue, Southwest, Virgin Australia and airberlin because they don’t operate sufficient number of long-haul flights in excess of 2,500 miles. The results above for these airlines are entirely based on the short-haul ones.

Here the airlines that charge those outrageous fuel surcharges are on the top. For them, it doesn’t really matter if they book an award because they collect most of the revenue out of the charged fuel surcharges.

The top 10 markets for Southwest must be mostly intra-Texas and for JetBlue the North East to Florida. The frequency on these are usually high and the prices tend to be low.

The survey must have done the research when the Southwest flights on those high frequency short haul flights have been on sale. 7,887 points would translate to a paid fare of $131.45 per round-trip on average.

Those certainly would be the flights that I would rather buy than redeem points or miles on.

When you are reading surveys like this, you always must check the methodology used and if there are any caveats or possible survey bias.

It is, however, a good snapshot of the current state of airline awards if you remove the airlines that use dynamic pricing and take into account that you must pay for the fuel surcharges on most of the best long-haul airlines with economy availability.