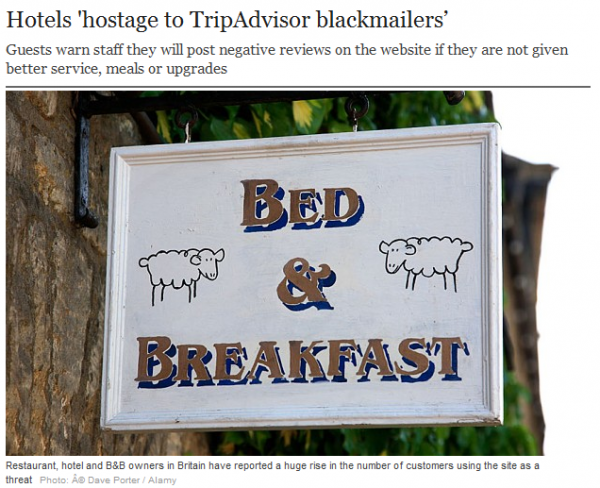 The UK newspaper The Telegraph has an article about this on its website that you can access here.

Hotels and restaurants are being targeted by “blackmailers” who demand free meals and stays in exchange for not writing bad reviews on the TripAdvisor website, hospitality chiefs have warned.

Guests are warning staff that they will post bad comments on the review website if they are not given better service, meals or upgrades.

Restaurant, hotel and B&B owners in Britain have reported a huge rise in the number of customers using the site as a threat. They say the guests often make a complaint and say they will post a bad review unless given a free bottle of wine, dessert or a bill reduction.

“People threatening restaurants and hotels with bad TripAdvisor reviews to extort free things is a problem which has been growing,” he said.

“While it’s very difficult to put an exact figure on how widespread the problem is, it is clear that a small minority of online reviewers are directly blackmailing – or sometimes subtly blackmailing – restaurants for their own gain.

“People will either attempt to blackmail during the meal, or sometimes, more worryingly, people who have not even been to the restaurant will post a bad review to try to get a free meal, or a free stay in a hotel’s case. While it can be difficult to prove that somebody has blackmailed you, we would advise that business owners do not respond – or make free offers – to reviewers they suspect are malicious.”

Some hoteliers and restaurant owners are just crying here because the review sites such as Yelp and TripAdvisor have given the users some power to voice their opinions about these establishments.

Reviews on these online sites are mostly positive (especially on TripAdvisor) and often have very little to do with the reality.