Thai Military Declares Martial Law (Coup d’état?) & What Does It Mean For Visitors?

A lot has happened in Thailand since the previous coup by the army in 2006 that removed Thaksin from power and eventually forced him to exile. 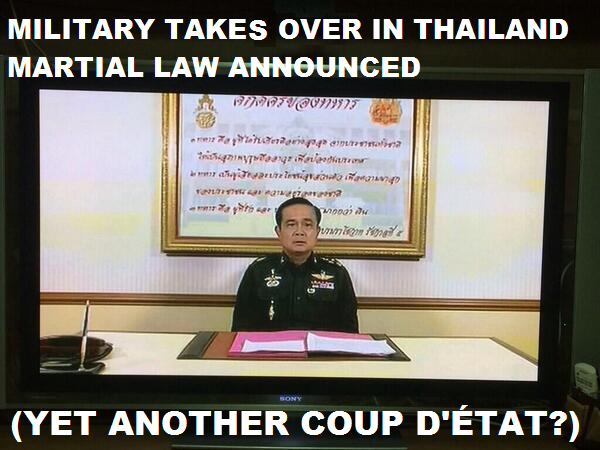 There has been a lot of unrest in Thailand and Bangkok in the past year that culminated in the resignation of the Prime Minister Yingluck (Thaksin’s sister) after Constitutional Court found her guilty for abuse of power.

You can read more about recent developments on CNN’s website here and on BBC’s here. It is always worth checking the Bangkok Post here and the Nation here that are the two English dailies published in Bangkok.

The protests between the supporters of the current government (mostly rural Thai’s) and opposition (often called the Bangkok elite) were escalating and a mass strike was planned this week that could have stopped flights from/to Thailand.

All changed when the Thai military made an announcement at 3AM local time on an army controlled TV station that they were declaring martial law, but that the current government would still continue to operate. More than 10 TV stations were shut down.

Whether this is an army coup or evolves to a coup, is partially semantics. The army is in power and has replaced the democratically elected government.

This probably means that the mass strikes are going to be called off and that flight operations will continue to operate normally.

What does this means to tourists?

If your destination is outside of Bangkok, you won’t likely notice anything. The holiday business in places such as Phuket, Koh Samui, Pattaya, Hua Hin etc. will continue uninterrupted. This has always been the case during previous unrest.

The situation in Bangkok could be different if there are mass protests by government supporters or opposition. These protests often occupy traffic intersections that may stop the already congested Bangkok traffic entirely. Using the train that operates to/from Bangkok international airport could be a wise choice.

There is no rail link to the old international airport (DMK) that is now used mainly by the discount carriers such as Air Asia and NOK.

I really wish that the two sides could reach a compromise, but this is unlikely. The “Bangkok elite” would prefer a caretaker government that is not selected by the public vote and the rural Thais that can always win by the popular vote disagree. Then there are always the accusations of voter fraud and buying votes using cash.

As a tourist or a visitor you are unlikely notice anything as long as you stay out of Bangkok. The next few days or couple of weeks should indicate whether the army will take over the entire government. There could be some unrest in Bangkok and the traffic could be even bigger mess than it usually is.

I am going to be in Bangkok for maybe 10 days in less than two weeks and don’t worry a bit, as I have already gone through couple of floods and some unrest on my previous visits to the city.