Military Coup In Thailand & Nightly Curfew Between 10PM – 5AM

What started as martial law by the military two days ago has now lead to a full blown coup. This is the 19th coup or attempted one by the military since the country abolished the absolute monarchy in 1932 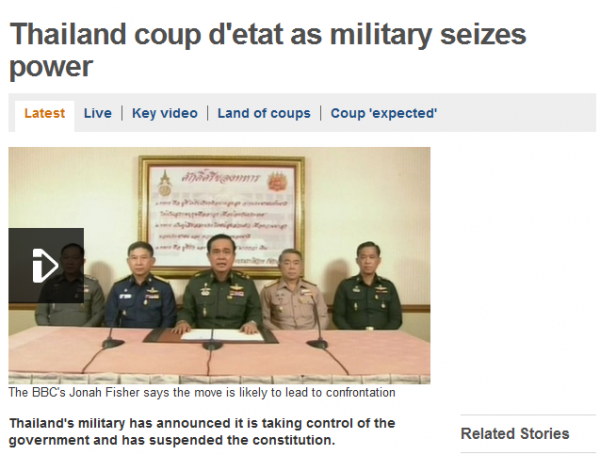 The military has also announced a night curfew from 10PM to 5AM. It is unclear for how long this nightly curfew will last.

You can read more about these latest developments on CNN’s website here and on BBC’s here.

EDIT: If you are traveling to/from airports during the curfew hours, you must have printed itinerary with you to show if required at checkpoints.

Here are some tidbits from the BBC:

Thailand’s military has announced it is taking control of the government and has suspended the constitution.

The cabinet has been told to report to the military, TV broadcasting is suspended and political gatherings are banned. A nationwide curfew will operate from 22:00 to 05:00 local time.

The coup follows months of political turmoil in Thailand.

On Tuesday the army imposed martial law. Talks were then held between the main political factions, but the army announced the coup on Thursday.

And here from the CNN one:

The developments are the latest in a chain of failed attempts to defuse tensions that have simmered since November. The discord has its roots in politics, and led to both pro- and anti-government factions to fight over the country’s leadership.

Three days ago, the military imposed martial law in an attempt to end the instability, but said it was not a coup. Now, it has taken power outright.

The move came after rival factions were unable to come up with a suitable agreement to govern, the military chief said.

Hours earlier, members of the military and opposition parties met for a second day to try to find a solution to the crisis in Thailand.

Members of the political parties involved in the talks were seen being escorted by the military after the meeting.

In his address, the military chief told citizens that despite the coup, it should be business as usual for the public. All civil servants and officials should report to work, he said, and anyone who has weapons — such as police — should not make any attempt to move those weapons without orders.

The military also said it will provide security to foreigners, including vacationers and diplomats.

The people of Thailand are all too familiar with coups. Thursday’s coup was at least the 19th actual or attempted military takeover since Thailand became a constitutional monarchy in 1932.

I am sure that everyone hopes that the political instability that has plagued Thailand for the past 10 years (or 100) would come to an end.

The curfew will likely be enforced in Bangkok. I truly doubt that this would have too much of an effect in Phuket, Koh Samui and Pattaya where the tourists congregate in Thailand.

If you have tickets to Thailand and Bangkok for the next few days/weeks and you feel uncomfortable making the trip due to the current situation, you should contact the airline that issued the ticket(s). They should have waivers in place that would allow taking the trip later or maybe refunding it altogether.

I will be in Bangkok about 10 days time. Hope that the army has abolished the curfew by then or it will be very dry few days.