There seems to be a fair amount of “drama” on a flights to/from Australia. This time a passenger had been verbally abusive that had lead one of he crew members report that he/she was unfit fo duty for the return flight. 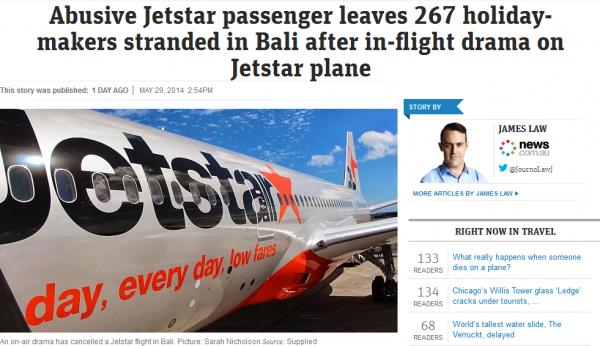 Discount carriers such as JetStar often operate on the minimum number of crew members allowed. This means that if one reports that he/she is unfit for the duty and the airline cannot find a replacement, the flight is simply just canceled. On this instance, the pilots flew the aircraft back to Australia without any passengers.

You can read more about this incident on New.com.au website here.

A Jetstar spokesman said the abuse was verbal — but passengers were told that three flight attendants were physically injured in the altercation and required medical attention.

The spokesman said the airline did not tolerate anti-social behaviour.

“Our crew are trained to deal with these situations and handled the incident professionally,” he said.

“Due to the nature of the incident and in the interest of crew wellbeing, a return flight from Bali to Brisbane was cancelled.

One of the crew took themselves off duty after the drama, which meant the 11.35pm Bali-to-Brisbane flight, JQ46, was not able to go ahead because Civil Aviation Safety Authority rules dictate that eight crew members are needed and the flight only had seven.

You take your changes when you fly on carriers such as JetStar. It is unfortunate that one of the crew members felt that he/she was not fit for duty that ended up canceling the flight altogether.

The abusive passenger was denied entry to Indonesia and was waiting to be deported. It is unclear from the news pieces that I have seen what is the nationality of the passenger.