The awards nights started to count towards elite status in the July of 2013 and qualifying nights over 50 rolled over to 2014.

The year-to-date summary now breakdowns the total number of points earned versus the elite qualifying ones. It shows the rewards nights that you have consumed and possible rollover nights.

The “Elite Qualifying Nights” required for Platinum elite is incorrect, however, as I have already stayed at 4 IHG brands and would qualify for the 40 nights fast track offer.

The “Your Elite Qualifying Points and Nights” tries to explain this in graphical format but it is not “interactive” and doesn’t even take into account the fact that if IHG would demote my account from Royal Ambassador status it would get softlanding to Platinum Ambassador. 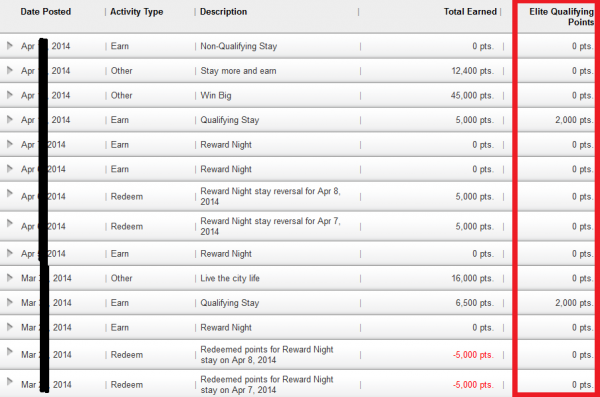 The breakdown for each stay has cleaner display compared to previously and you can now see the number of qualifying nights that you have earned for any individual stay.

The stay history online still doesn’t show more than the past 180 days but you can access far longer history by using the mobile interface at m.ihg.com. It will show the stays for several years but without number of points earned breakdown.

The new layout has more information that previously that is a good thing. You should, however, every once in a while check that your stays have been recorded correctly.