Thai Airways has decided to “simplify” (their word) Royal Orchid Plus award charts and introduce one-way award pricing that is often requires the same number of miles as the current return award. 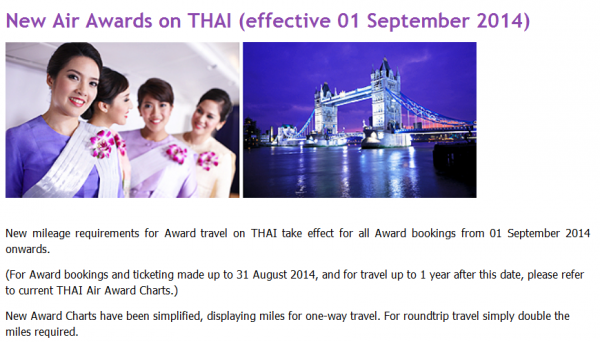 Thai Airways is also enhancing the Star Alliance awards. Thanks for a LoyaltyLobby reader alerting me about this program change.

Here are some examples of the current and September 1 differences:

The Star Alliance award chart is getting similar treatment.

If you have any Thai Airways Royal Orchid Plus miles, you absolutely should issue the awards before the new charts take place. It rarely makes sense to redeem Thai miles for economy due to high fuel surcharges that the airline collects on award tickets.

Bangkok tends to be very competitively priced market. I would just buy business class tickets using Malaysia Airlines or any of the Middle Eastern ones (Emirates, Qatar or Etihad) and forget collecting Royal Orchid Plus miles that are basically worthless after this “enhancement”.