As I am planning a trip to South America and try to visit countries that I have not been to previously, I have followed the situation brewing in Venezuela already for a while. 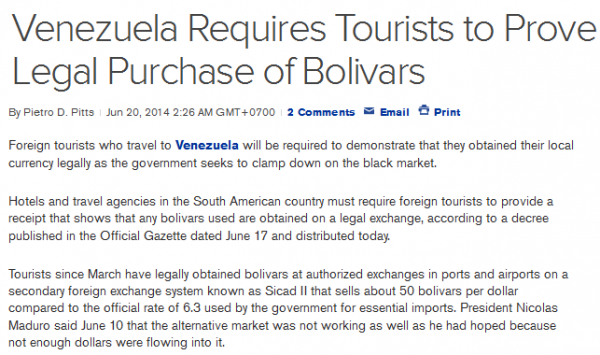 I wrote about earlier this month (read more here) about the different exchange rates used by the government and the blackmarket rate that everybody should use that visit the country, although exchanging cash through unofficial channels is illegal.

Foreign tourists who travel to Venezuela will be required to demonstrate that they obtained their local currency legally as the government seeks to clamp down on the black market.

Hotels and travel agencies in the South American country must require foreign tourists to provide a receipt that shows that any bolivars used are obtained on a legal exchange, according to a decree published in the Official Gazette dated June 17 and distributed today.

Tourists since March have legally obtained bolivars at authorized exchanges in ports and airports on a secondary foreign exchange system known as Sicad II that sells about 50 bolivars per dollar compared to the official rate of 6.3 used by the government for essential imports. President Nicolas Maduro said June 10 that the alternative market was not working as well as he had hoped because not enough dollars were flowing into it.

“The government is looking to force tourists to change currency at the official rate and capture dollars from tourism in the Sicad II market,” Asdrubal Oliveros, director of Caracas-based consultancy Ecoanalitica, said today by telephone. “The tourism sector generates very little revenue, and the measure will be difficult to enforce.”

Venezuela’s capital, Caracas, blighted by crime and shortages, became the world’s most expensive city for expatriates at the primary exchange rate, according to a cost of living survey released this month by ECA International. The country becomes much cheaper with the black market, where one dollar sells for about 73 bolivars, according to dolartoday.com, a website that tracks the rate on the Colombian border.

Well. I can certainly always choose to exchange some cash via the official Sicad II rate and then more on the blackmarket. I truly doubt that the hotels or travel agencies are able to track via the government where the exchange of the money used on that specific date came from.