Loews has bought the InterContinental O’Hare hotel that opened in 2008 and soon ended up in the bankruptcy court. 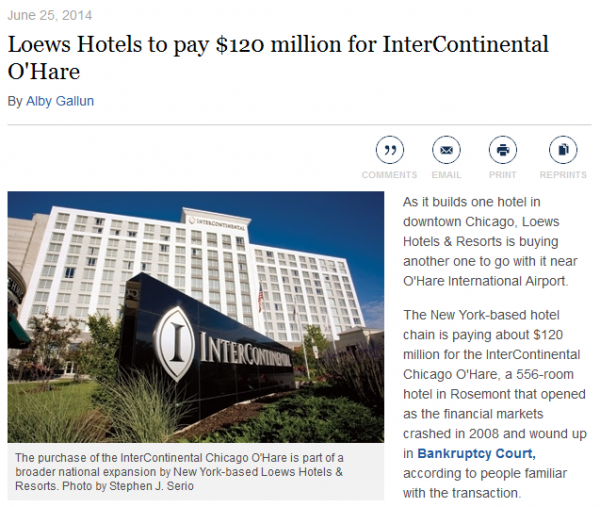 Loews has paid $120 million to acquire the property and will soon reflag it under their own brand. It is unclear at this time when this will happen.

As it builds one hotel in downtown Chicago, Loews Hotels & Resorts is buying another one to go with it near O’Hare International Airport.

The New York-based hotel chain is paying about $120 million for the InterContinental Chicago O’Hare, a 556-room hotel in Rosemont that opened as the financial markets crashed in 2008 and wound up in Bankruptcy Court, according to people familiar with the transaction.

Loews plans to slap its name on the hotel at 5300 N. River Road, part of a broader national expansion by the chain that includes a 400-room hotel under construction in Streeterville. That hotel, at Illinois Street and Park Drive, is expected to open next February.

The InterContinental was a victim of bad timing, opening in September 2008, just a week before Lehman Bros. filed for bankruptcy and world financial markets went into a freefall, dragging the hotel sector down also. Less than a year later, the hotel’s developer, a venture led by Harp Group Inc., also filed for Chapter 11 protection, unable to pay off about $140 million it borrowed to finance construction of the $180 million building.

The sale to Loews illustrates how much better the hotel market is today. Harp agreed to sell the InterContinental for just $42 million in 2010, as the market was starting to pull out of its slump.

But the hotel’s lenders, including New York-based Amalgamated Bank, persuaded a bankruptcy judge to reject that sale, and they repossessed the property in late 2011. Since then, Chicago-area hotel occupancies and room rates have rebounded almost to pre-recession levels, which, along with the strong financial markets, has boosted hotel values.

This is basically an airport hotel and the room rates around the O’Hare don’t command anywhere near the same rates as in the downtown. The rates at the InterContinental O’Hare have been one of the lowest for an InterContinental hotel in the Northern America. I believe that I have stayed at this hotel once in the late 2000’s.