“How Powerful Is Your Passport” Movehub

There are surveys and studies out few times a year that compare passports from number nations to find out the ones with least visa restrictions. You can always check the entry requirements (both visa and health) for all countries by using Timatic (read more here) 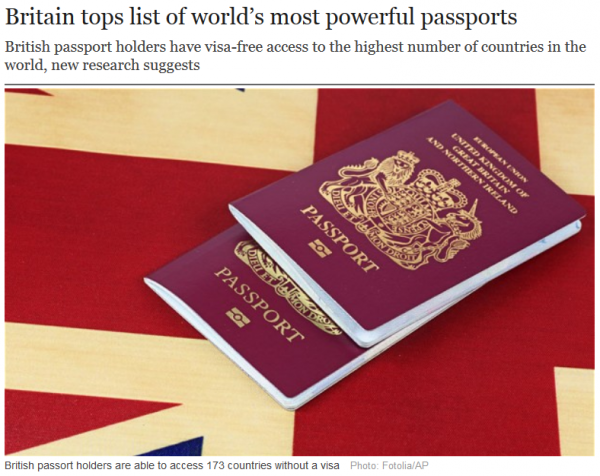 Usually the Nordic Countries have the least visa restrictions followed by the other European countries, United States, Canada and Australia.

Here are tidbits from the Telegraph article:

British travel documents were cited as among the most powerful in the world, with passport holders in the UK, along with those in Finland and Sweden, able to enter 173 countries either without a visa or with a visa-on-arrival, according to research by movehub.com, a website for people moving abroad.

The US, Denmark, Germany and Luxembourg were joint second in the ranking, with passport holders able to access 172 countries. Passport holders across countries in Europe, North America and Australasia, including Italy, France, Spain, Greece, Canada and New Zealand, generally had the best access, being able enter between 168 and 173 foreign countries without a visa or by receiving one upon arrival.

South American passport holders were shown to have moderate access, with Argentina and Brazil having the strongest visa-free entry privileges, being able to access 147 and 146 countries respectively.

The only news here is that the UK has joined the Sweden and Finland at the top for the most visa free travel. I travel on a Finnish passport and like the fact that there are very few visa requirements. Of the countries that I visit regularly, only China requires visa and I usually get it in Hong Kong.