The World Airlines Awards were released yesterday at the Farnborough International Airshow in the UK.

As is always the case with these awards, they are divided by the region and full versus LCC airlines. 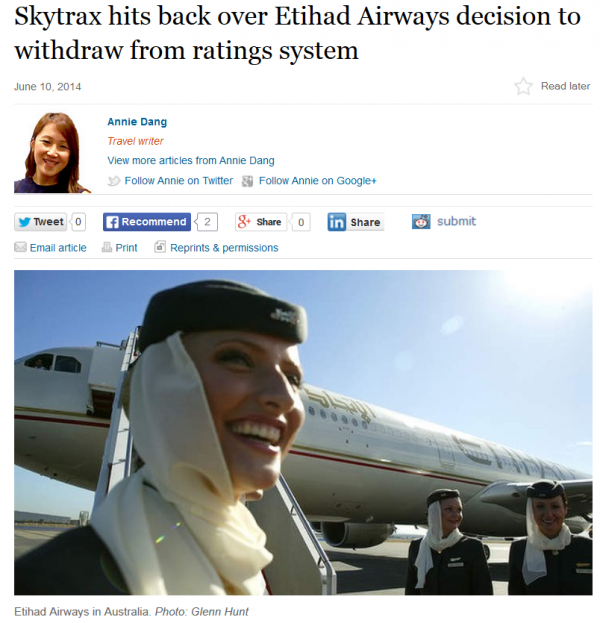 There was interesting piece last month in the Sydney Morning Herald (access here) when Etihad publicly announced that they were withdrawing from the World Airlines Awards and Skytrax audits.

In a statement, the Middle-Eastern airline said it sent a letter to UK-based Skytrax formally announcing its decision to withdraw from Skytrax ratings services, including the Skytrax World Airline Awards and the Skytrax Audit.

“The decision was made after Etihad Airways carried out a review of the criteria and measurement of the Skytrax Airline Rating System,” its reads.

“The measurement of customer satisfaction and feedback is important to Etihad Airways. The airline subscribes to monthly industry research and undertakes comprehensive monthly surveys to monitor customer satisfaction, using the insights to continually improve its products and services.”

The statement raises questions as to the ‘finer’ reasons for Etihad Airways’ decision to withdraw from the Skytrax ratings service, and has prompted Skytrax to hit back over the questioning of its methodology.

In a statement, Skytrax responded to Etihad’s request to withdraw, saying the statements made by the airline are “misleading” and have been “made without any material support”.

“For a Star Rating audit review where Skytrax work in conjunction with the airline, product consistency, planned changes and aircraft fleet information are transparent and key elements of the assessment criteria. When an airline is either unable or does not wish to provide information that may potentially influence the Star Rating, Skytrax have no option but to curtail work on such project,” the Skytrax statement reads.

1. the claims “Checked and trusted airline reviews” and “REAL travellers with REAL opinions!” were misleading and could be substantiated, because they understood that Skytrax did not verify the reviews on their website and therefore could not prove that they were genuine;

2. the claim “More than 5 million independent, traveller reviews and customer trip ratings” was misleading and could be substantiated;

3. the claim “Official Quality Star Ranking(TM)” was misleading, because it suggested that the ranking system was official and not the advertiser’s own creation;

4. the claim “The Star Ranking programme operates in a real-time analysis format, to ensure that Airline Star Ranking levels are constantly maintained and adjusted in accordance with changes made by an airline, be this to product or service standards – on average, each airline’s Star Ranking is reviewed in depth every 2-3 months, and adjusted in accordance with the annual ratings” was misleading and could be substantiated, because they understood that the website continued to display rankings for airlines which were no longer in business; and

5. the claim “TRADEMARK(TM) PROTECTION – The titles below are protected by Skytrax, and can only be used by a Registered 5-Star Airline with consent of Skytrax” and accompanying list were misleading, because they did not believe that those titles were trademarked.

You can read the entire case on the ASA’s website here or in the PDF below:

There are so many different hotel and airline related awards every year that I don’t even try to cover them all. The airlines, however, usually use their Skytrax stars or winnings on advertising and press releases (and sometimes even on their planes in case of Garuda Indonesia), so this is worth paying some attention to.

I wish that the company would release the methodology and criteria used in their assessments for these awards, however. The words in the press release describing how the company comes to these conclusions is not clear at all.