It is soon three days since the Malaysian Airlines flight MH17 went down in Eastern Ukraine. A friend of mine posted a link to a good article on NY Times about the downing of the plane and the situation surrounding it. 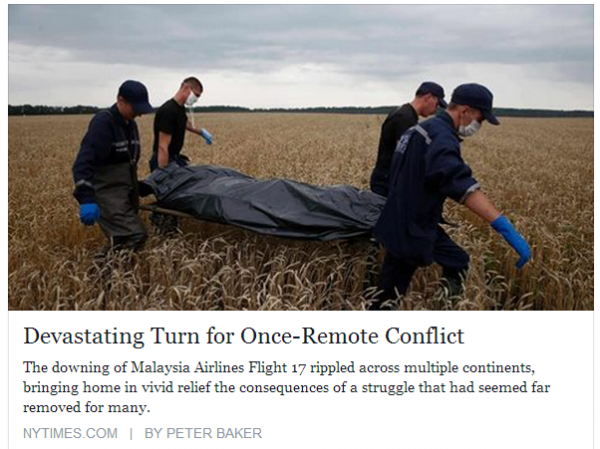 It is very unfortunate that the Malaysian Airlines and the passengers on the plane became victims of the dispute between the Ukraine and Russia.

You can read the NY Times article here:

The downing of Malaysia Airlines Flight 17 rippled across multiple continents — from Amsterdam, where friends and family had just seen off their loved ones, to the distant shores of Asia and Australia that had been waiting for 298 passengers and crew who would never show up. The tragedy reached as far as a college campus in Bloomington, Ind., shocked to find one of its doctoral students among the dead.

It was a day of confusion and anger, of grief and disbelief, of charges and countercharges, of politics and war. It was a day that brought home in vivid relief the consequences of a struggle in a torn society that had seemed far removed for many. And it was a day that was a long time in the making.

Malaysia Airlines has agreed to provide refunds to passengers even on non-refundable tickets that feel uncomfortable flying with them due to the recent incidents.

It is unlikely that the airline would collapse, however, as it is majority owned by the Malaysian Government that is expected to keep it a running despite the widening losses.

You just have to keep in mind that the traveling by air is extremely safe despite these two recent accidents.