It was reported yesterday by a Russian newspaper Vedomosti, which is partly owned by Financial Times & Wall Steer Journal, that Russian officials were considering limited or banning the European airlines from using the trans-Siberian route that provides the fastest connections and shortest flight time between Europe and North Asia such as Japan and Korea. 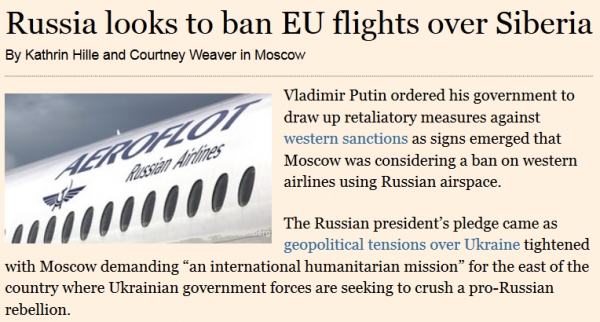 The reason for this would be the trade sanctions that have been implemented by the US and European Union due to Russian’s behavior in the Crimea and Eastern Ukraine including shooting down the Malaysian Airlines flight MH17.

You can read more about these developments on Financial Times here and on Bloomberg here.

There is interesting info on the Bloomberg article about the most affected airlines:

Operations between Europe and Japan, north-west China and South Korea are most exposed, according to the data, which excludes services starting or ending in Russia. Air France and KLM had 249 flights over Siberia last week, including routes linking Paris with Beijing, Shanghai and Wuhan in China, while Lufthansa together with its Austrian and Swiss units had 220. Punitive measures under consideration in Moscow include longer trans-Siberian routes for scheduled EU carriers and bans on charter flights, people with knowledge of the plans said today.

British Airways had 93 flights across Siberia between July 29 and Aug. 6, including operations from London to Tokyo, Seoul and Hong Kong. Still, the services represent a small part of the timetable for Europe’s top carriers, with the Lufthansa figure equal to 1 percent of the group’s 22,000 flights in the period.

The smaller Finnair Oyj (FIA1S) has more to lose, with 115 flights across Siberia during the week after the carrier made a virtue of Helsinki’s location on the fringes of the EU to offer connections to cities across northeast Asia using the shortest “great circle” routes through Russian airspace.

Seems that President Putin is becoming crazier by the day. Did he really think that annexing the Crimea and trying to annex Eastern Ukraine + shooting down the MH17 would go down well with the western countries?

The economic sanctions that have been implemented by both the US and European Union will likely mean that Russia will try to retaliate.

Closing the use of the trans-Siberian route for the European airlines would cost $300 million for the state owned Aeroflot (according to the Financial Times) that gets to keep those over flying fees.