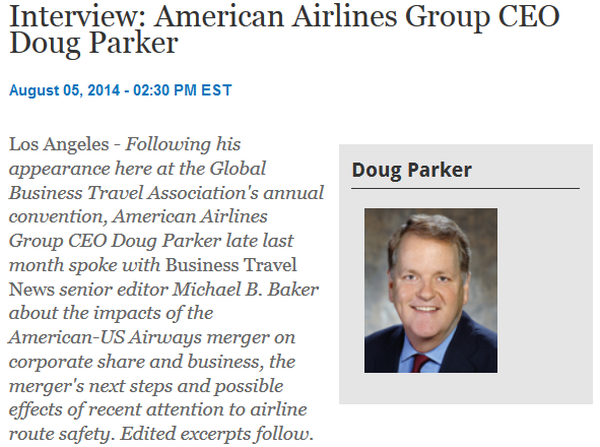 Now, the CEO of the American Airlines Group has chipped in as well during Business Travel Association’s annual meeting in Los Angeles last week.

You can read the full article on BusinessTravelNews website here.

[During an onstage appearance at the GBTA convention, Parker was asked whether American would follow Delta and United in moving to frequent-flyer program based on revenue accrued instead of miles flown. Such a move was “not even on the plate right now,” he said. “We have to get the two frequent-flyer programs merged first. If it makes sense to make that innovation, we may do that, but to try to change the program now would be foolish.”]

I would read this as nothing will happen how the miles are awarded for American Airlines frequent fliers in 2015, but there could be revenue based program coming in 2016.

It would be totally foolish trying to make the change now, when the US Airways and American Airlines frequent flier programs are separate.

The US Airways Dividend Miles accounts will be converted to AAdvantage one sometime in early 2015 and there are usually always some hiccups during the process. If there are drastic changes, I would imagine that they are only announced once the programs are merged and any possible issues fixed.