Expedia (US site only) has a quite liberal Best Price Guarantee program that matches lower prices found on other US based websites and offers a $50 coupon that can later be used towards a hotel reservation. 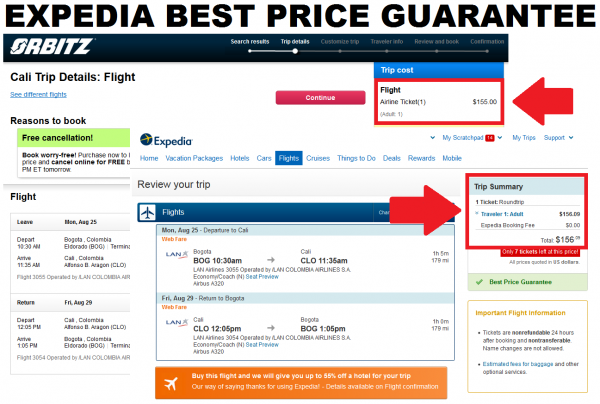 I have written about the guarantee several times as well as my success with matching hotel and flights prices mainly with Orbitz (difficult not to match their biggest US competitor). 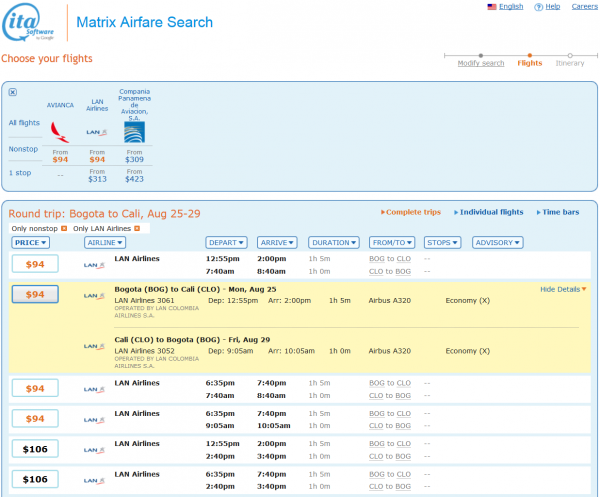 I decided that I would like to check out Cali that is less than two hundred miles from Bogota by air, but the ride would take at least 6 hours by taking a bus.

LAN and Avianca both offer good schedules between this city pair and Copa flies the route as well. The prices between domestic cities within Colombia tend to be rather low and this was the case with BOG-CLO flights as well.

I first checked LAN’s, Avianca’s, and Copa’s websites and ruled out the Copa due to very limited schedule. The price offered on Avianca ($100) was bit lower than LAN’s ($117). The LAN’s cheapest flight would book to a fare bucket that had limited availability and would not earn anything on AA’s program. 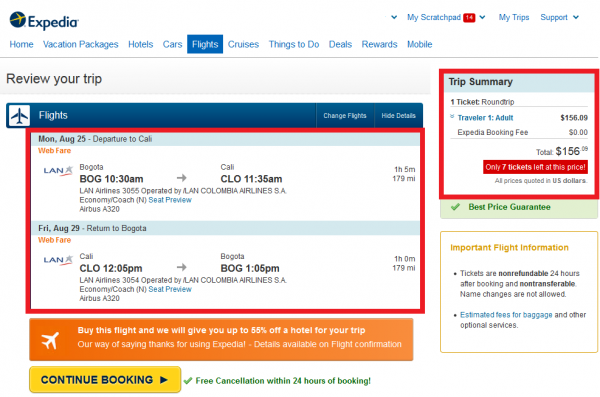 Then I decided to check both Orbitz and Expedia. The LAN flights were pricing at $156.09 on Expedia but would book into N class that is fully miles qualifying on AA and the availability of the flights was great. Also, the change and cancel fees were quite moderate if my plans change. 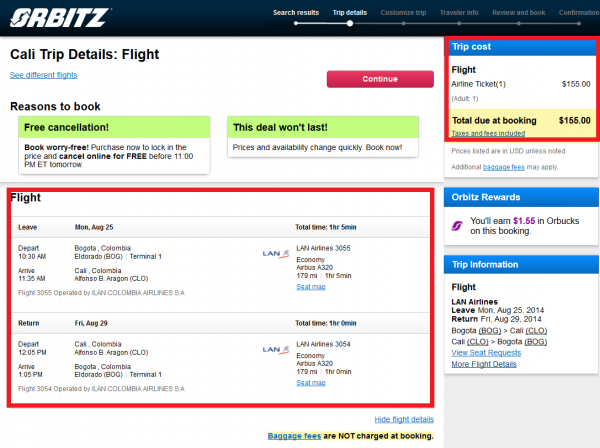 The Orbitz had the exact same flights for $1.09 lower. After making the purchase on Expedia, I immediately filed for the Best Rate Guarantee.

All you need to do, is to fill out the short form and upload the proof of evidence of the lower price on another site. Expedia used to process these Best Rate Guarantee claims in a light speed (less than an hour), but now seems to take 2 days at the minimum.

I received an email from Expedia about a $1.09 credit to the MasterCard I had used to pay, but no email about the claim itself. I dropped them an email and received a reply couple of hours later that they claim had been approved and the $50 BPG coupon deposited to my account sometime after the flights were flown.

So, by going the Expedia Best Price Guarantee route, I was able to bring the price of the flights down to roughly what LAN was offering on its website after factoring in the value of the $50 BPG coupon (I value these around $35). Also, the higher fare offered better availability and some miles on AA’s program not forgetting the ability to cancel the flights or reschedule them for a modest fee.

Airlines often have fares that are SITI and/or SOTO (SITI = Sold Inside Ticketed Inside and SOTO – Sold Outside Ticketed Outside) and they may differ significantly.

Sometime the SITI fares may be lower and SOTO ones higher but that is not often the case. Also, the fare bucket availability may differ between different POS (Point Of Sale) locations. Airlines may decide to offer better availability for domestic POS compared to a foreign one.

This is just a reminder that you should check the airfares using the various sites that are out there and maybe do a Best Rate Guarantee with Expedia if their price is higher than those of competitors such as Orbitz.

WSJ: “New Tactics in the Fight Against Stolen Luggage”