Wall Street Journal has an article this week about how TSA (yeah – really) tries to combat theft from the checked in luggage. 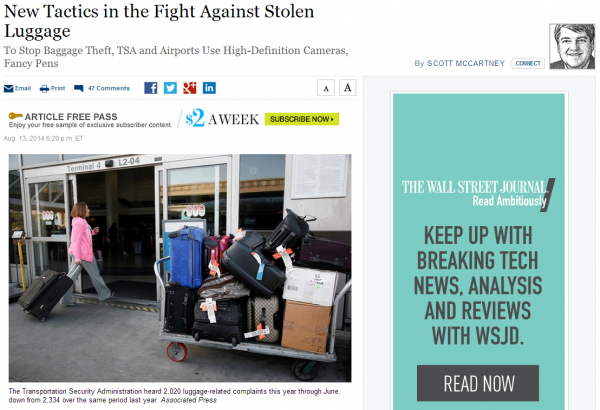 Pilfering from the checked bags is always unfortunate and you really shouldn’t check in any valuable such as electronics.

TSA has been sending “bait bags” through for screening with valuables such as iPads, watches and jewelry to entice dishonest agents. In the past two years, the agency has sent bait bags through screening 3,500 times; 10 items were stolen and those agents caught were fired.

In one case, a 10-year veteran who had received commendations pocketed a Montblanc pen, according to TSA Administrator John Pistole. “That’s still 10 too many,” he said.

A total of 507 screeners have been fired for stealing over TSA’s 13-year history, the agency said. Mr. Pistole launched a crackdown on theft two years ago and appears to be making progress. Last year, 56 screeners were fired for stealing and referred to police. So far this year there have been 22 firings for theft. And in the first six months of this year, the number of complaints filed against TSA for the handling of personal property fell 13% compared with the same period of 2013.

I have flown somewhere between 2 and 3 million miles and nothing has been ever stolen from my checked bag(s) or my bag(s) gone totally missing. Airlines have misplaced my bag(s) several times, but I have always eventually get them back.

It is very difficult for me to understand why people are checking in any valuables? I only check in clothes and maybe some documents every once in a while. I have never ever checked in anything that would be valuable for somebody else.

You must partly blame the airlines for these thefts as well. The ground handling is often outsourced for the lowest cost bidder that pay peanuts for the employees handling the bags. If you are making $8 per hour, have uncomfortable working environment and the likelihood of getting caught is low, the pilfered iPad from the checked in bag can double their weekly pay.