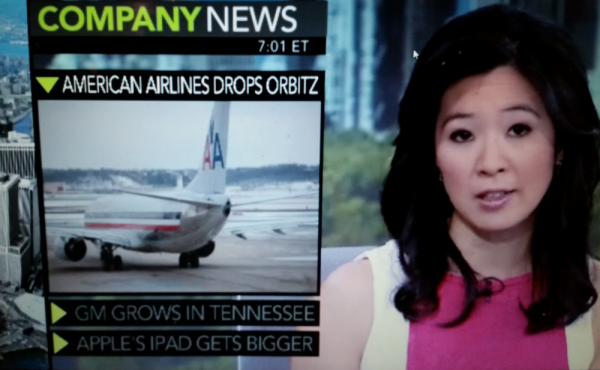 US Airways flights are expected to be withdrawn on September 1, 2014.

You can read more about this on Bloomberg’s website here:

The move is effective immediately for data from the company’s American Airlines unit. Fares from merger partner US Airways will disappear Sept. 1 after its accord expires, Fort Worth, Texas-based American said today in a statement.

Orbitz, which has been listing American flights and fares without a contract, depends more on U.S. airline ticket sales than other online travel services like Expedia Inc. and Priceline Group Inc., said Manish Hemrajani, an Oppenheimer & Co. analyst. American, the world’s largest airline, said it expects “minimal disruptions” for customers.

“It’s key for Orbitz more so than the others,” Hemrajani said in an interview. “It’s important to them to have American on their side. I wouldn’t imagine they’d be comfortable in letting them go.”

The loss of American may affect about 1.8 percent of Orbitz’s revenue this year, he said. The company had sales of $847 million in 2013. American also withdrew data from Orbitz in a 2010 dispute, and the online service provider’s shares “severely underperformed” the stock market and competitors during that time, the analyst said.

Quite frankly, I don’t get it why consumers would book airfare on airlines’ own websites considering how bad they are. I always use websites such as Orbitz (juts bought one ticket from then earlier today) and Expedia.