If someone had said to me that I would see these “knuckle busters” from 1980’s during my trip to Latin America, I would have just laughed in his/her face. But I would have been wrong and was next expecting to be asked for a Chargex or MasterCharge card (1970’s precursors to Visa and MasterCard). 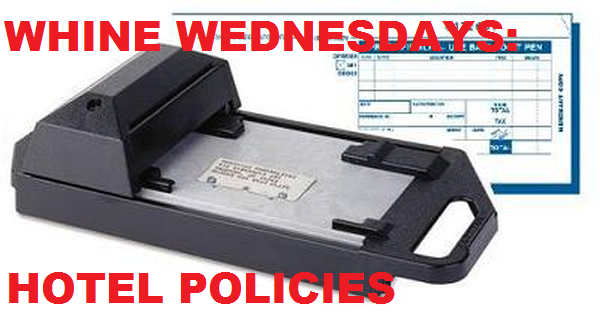 Quite frankly, I really don’t understand the purpose of using these machines and what for in Colombia and Panama. Merchants should only have these available just in case their modern swipe machines are out of service.

Here are three archaic hotel policies from Colombia and Panama that I don’t get:

1. The agent swipes the card using this “knuckle buster” and asks me to sign a blank slip. I refuse. I explain that I wouldn’t sign a blank check and they shouldn’t either.

2. Agent authorizes the card for xyz amount and asks me to sign the authorization slip. I refuse. They can authorize the card for whatever amount they see fit, but I won’t sign the slip before I actually check out.

3. Hotel has very long “hotel rules & regulations” using extremely tiny font in Spanish on the registration sheet that I am expected to sign. When I request an English version of this text, they don’t have it available. I just put huge Z over it before signing.

Having these carbon copies of our credit cards laying around at hotels when they likely have your billing address info as well, is probably not the wisest idea. Although in most cases the maximum liability for unauthorized use by a third party is only $50.

Why would I sign a blank credit card slip and allow the hotel to charge whatever they wish? What is the purpose of having hotel “rules and regulations” only in Spanish when a property is part of an international chain? Why on earth anyone would be required to sign a credit card authorization slip? None of these make any sense for me, but have now happened at more than one hotel.