Couple of weeks ago, I wrote about an offer from United for $30 Uber credit + 1,000 MileagePlus miles for trying out the service. I mentioned on the piece that I am probably the only one that hadn’t use the service yet.

Well. When I was in Panama last week, I decided to sign up for the service using the United app to get the bonus miles and was surprised to find out that Uber had cars in the city.

You can access my United/Uber piece here and use my invitation to get up to $30 in free rides here.

Getting the promised $30 credit

After signing up for the service, I only had $10 promotional credit applied to my account that is probably what Uber is offering in Panama. I decided to drop a message to the customer service that the email from United had promised $30 and the reply that came within a day added $20 to the credit that I had sitting on my account. So far very impressed.

Getting a car from Westin or InterContinental Playa Bonita

I was staying at the Westin Playa Bonita and needed a ride back to the city. The problem was that Uber had no cars in the area. They are all apparently stationed right in the same spot in the centre of the city and that’s too far for the app. I used hotel card that was $25. The estimated Uber cost would have been 20.

Getting a car to the airport

On this past Monday morning, I decided to use Uber to get me to the airport from the Hilton Garden Inn. Suddenly there was no cars available. Found one and it took around 20 minutes to get to the hotel. 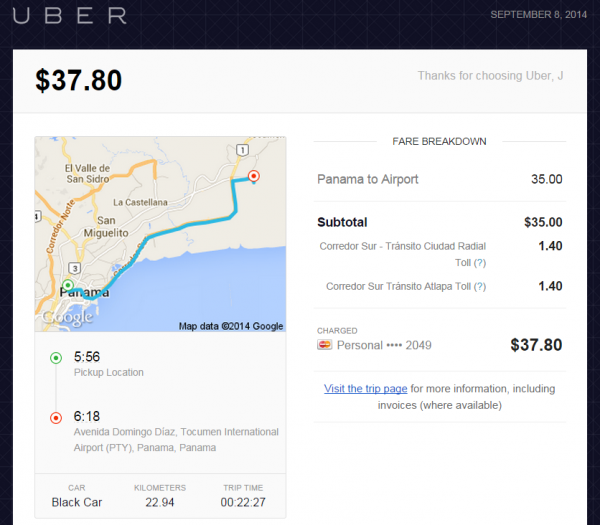 Uber seems to have a set fare from the downtown area to the PTY that is $35 without the tolls. The total came to $37.80, when I could have just taken one of the hotel cars fro $30 without all the hassle to deal with the Uber.

Problems with Uber in Panama

– Many of the drivers has zero knowledge of English

– The Uber app doesn’t communicate the name of the hotel to the driver, but only the address.

– I had to call the driver in most occasions to make sure that they actually come to the right place (used the service 6 or 7 times). Texting them was useless.

– One of the drivers was blasting church service from the stereo that I asked him to turn off. He then tried to listen to the service using headphones that didn’t work out.

– The cars are not well positioned around the city and you cannot rely the service to get you around when needed.

Overall, I was satisfied with the service when it was working properly and some of the drivers were very professional. I truly doubt that I would be using it in cities that have developed and working taxi system such as most of the countries in Europe and Asia.

The prices in Panama were about the same for longer trips that I would have paid as a foreigner, but not competitive for short hops within the city center. Taxis in Panama don’t use meters but you are required to negotiate with the driver that puts you in a disadvantageous position compared to locals.

Seems that Uber would have been available in Bogota as well, but why would I have used the service there? I really liked the taxi app that was working well.

Civil Aviation Administration of China (CAAC) on Tuesday issued a notice that it extends Five Ones policy until October 2020 if not longer and...

Hertz Just Filed For Chapter 11 Bankruptcy After Running Out Of...

China Likely To Extend Restrictions On International Flights Until October 1,...

Conrad Bali Stay Certificates Through December 25, 2021 (Buy By May...