The good thing about Hilton HHonors is that the program often runs number of concurrent promotions that you can take advantage of at the same time to turbo charge your points & miles earnings. 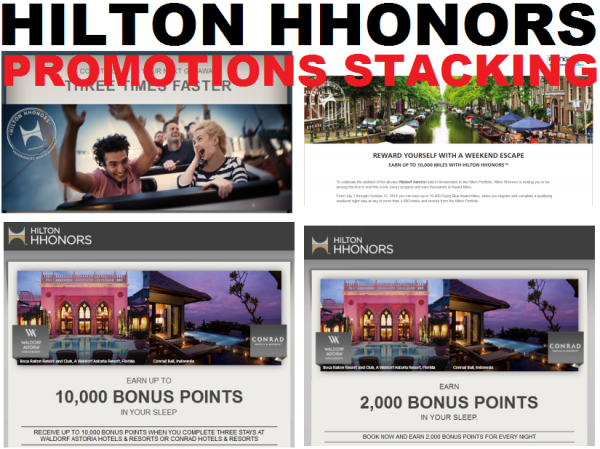 The Triple Your trips that is valid until the end of September for double/triple points at participating properties (many have opted out), Air France-KLM Flying Blue 1,000 bonus miles per weekend night (up to 10K) until October 31, and two Waldorf Astoria promotions for 2,000 bonus points per night night and 10,000 bonus points for 3 stays both valid until December 31, 2014.

Here are the links for these offers:

Without signing up for any offers and having Air France-KLM Flying Blue as the preferred Double Dip Points + Miles partner, I would have earned just 2,485 Hilton HHonors points for the stays. After signing up for all the above mentioned offers, I earned total of 8,861 Hilton HHonors points + 1,118 Air France-KLM Flying Blue miles.

This is just demonstration that you should be aware of all the promotions out there and then stack them to your advantage.

I only need one more stay to max the Air France-KLM Flying Blue weekend nights offer and will probably switch my preferred airline partner then to Lufthansa Miles&More that has Hilton promo going on as well (read more here). Will max the 10,000 Waldorf-Astoria/Conrad promo next month in Bangkok, where I will book couple of nights at the Conrad using the current flash sale (read more here).

Then there is still the fourth quarter Hilton promo coming up that I have no knowledge as of yet, but we should learn by the end of the month.